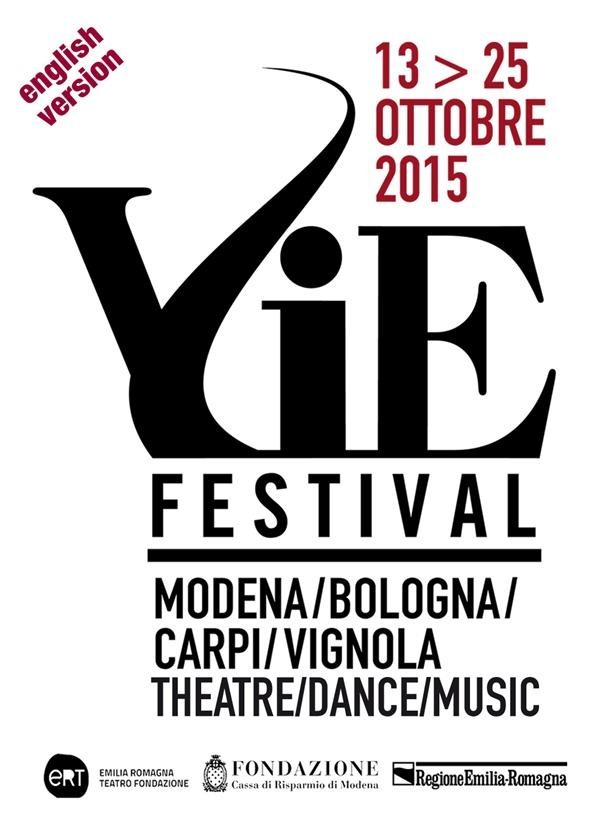 VIE Festival was founded in 2005 with the goal of crossing the contemporary world, of intercepting new identities and subjectivities which stand out in the field of live performance. It takes place yearly every October in Emilia-Romagna Region, and it is organized by Emilia Romagna Teatro Fondazione, National Theatre based in Modena. The project spring from the ten-year lucky experience of Le vie dei festival that, from 1994 to 2004, has hosted some of the most interesting proposals of Italian and international summer festivals. Mixing languages and genres, showing foreign great theatrical experiences without forgetting the important Italian experimental theatre scene, Le vie dei festival proposed the works of several artists (Carmelo Bene, Thierry Salmon, Lev Dodin, Peter Brook, Maguy Marin, Joseph Chaikin, Philip Glass, Robert Wilson e Peter Stein …). VIE Festival focuses on the contemporary creation, wants to give to the look the responsibility of finding, of searching where the strength of the new is hiding today, the artists who are able to explore the areas of contact between the performing arts, the expressive areas where leaving the theatre interacting with dance, music, visual arts and cinema. The idea of modernity is combined immediately with that of complexity, something that is in constant motion and fast in its indefiniteness. The artistic research acts vertically, digging in depth. It does not indicate solutions, but rather raises some doubts. It is inclined to the “uncertain”. At the base of the research for new languages there is always an urgent reflection on the contemporary world, a need for new contents. The festival aims to offer a wide range of artists who will confront themselves with a plurality of spaces, aiming at showing layers of artwork, poetry and looks which arouse the curiosity and urgencies, including the less codified. The plurality of languages will involve different audiences, aiming at erasing the prejudice on that contemporary is equivalent to incomprehensible and elitist. The Festival also stands out as a place of production or co-production of original works that will be created on purpose and then will enter the international circuit. This 11th edition take place in Modena, Bologna, Carpi and Vignola, and hosts the creations directed by Levan Tsuladze, Berardi Casolari, Anna Peschke, Virgilio Sieni, Gabriella Salvaterra, Nanfang Song And Dance Company, Mathurin Bolze, Nelson Valente, Pascal Rambert, Maguy Marin, Cuocolo / Bosetti, Michele Abbondanza, Snejanka Mihaylova, Motus, Giovanna Marini, Big Action Money, Marco Martinelli / Ermanna Montanari, Romeo Castellucci, Frank Van Laecke / Alain Platel / Steven Prengels. VIE Events section gives the opportunity to take part in some in-depht analisys moments, such as the study meeting “The scandal of the theatre” organized by the Department of Arts of the University of Bologna and by Paris–Sorbonne University. And then, a meeting about contemporary circus, and the public talk to introduce two theatrical books.