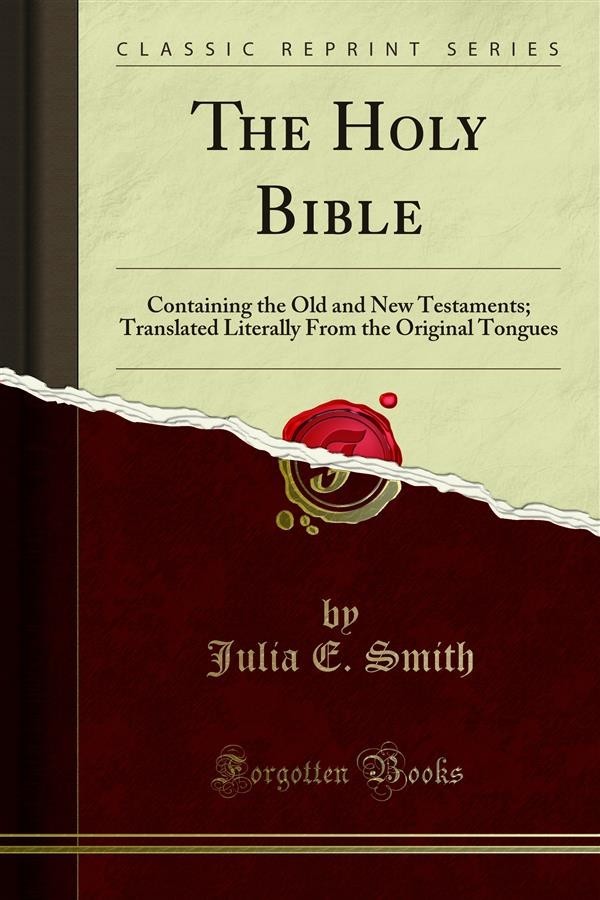 Over twenty years ago, when I had four sisters, a friend met with us weekly, to search the Scriptures, we being desirous to learn the exact meaning of every Greek and Hebrew word, from. Which King J ames's forty-seven translators had taken their version of the Bible. We saw by the margin that the text had not been given literally, and it was the. Literal meaning we' were seeking. I had studied Latin and Greek at school, and began by translating the Greek New Testament, and then the Septuagint, from which our Saviour quoted one or two texts which are not in the Hebrew Bible, and there is now said to be no Hebrew Bible extant so old as the Septuagint. We all. Had a strong desire to learn the signification of the proper names, and I wrote to a learned friend about it, and he advised me to study Hebrew, saying, it.was a simple language, and easily learned, there being but one book in the world, of pure Hebrew, which was the He added that, then I could see with my own eyes, and not look through the glasses of my neighbors I soon gave my attention to the Hebrew, and Studied it thoroughly, and wrote it out word for word, giving no ideas of my own, but endeavoring to put the same English word for the same Hebrew or Greek word, everywhere, while King J ames's translators have wholly differed from this rule; but it appeared to us to give a much clearer under standing of the text. It had never at that time. Entered my mind that I should ever publish the work, but I was so much interested and entertained to see the connection from Genesis to Revelation, that I continued my labors and wrote out the Bible five times, twice from the Greek, twice from the Hebrew, and once from the Latin — the Vulgate. These three languages were written over the head of' our' Saviour. They are now dead languages and cannot be altered. The whole construction is so complete, that' it does seem to be the work of inspiration, and the only communication from God to man, for all time. The work is given in types, in figures, in parables, and in dark sayings, a knowledge of which is gained, as all other knowledge is gained,. By thedcsire of the heart to learn it. It may be' thought by the public in general, that Ihave great confidence in myself, in not conferring with the learned in so great a work, but as there is but one book in the Hebrew tongue, and I have defined it word for word, I do not see how anybody can know more about it than I do. It being a dead language no improvements can be made upon it. As for the Latin and Greek, I have no doubt many have searched deeper into the standard Works than I have, but I think no one has given more time and attention to the literal meaning of the Bible text in these languages.