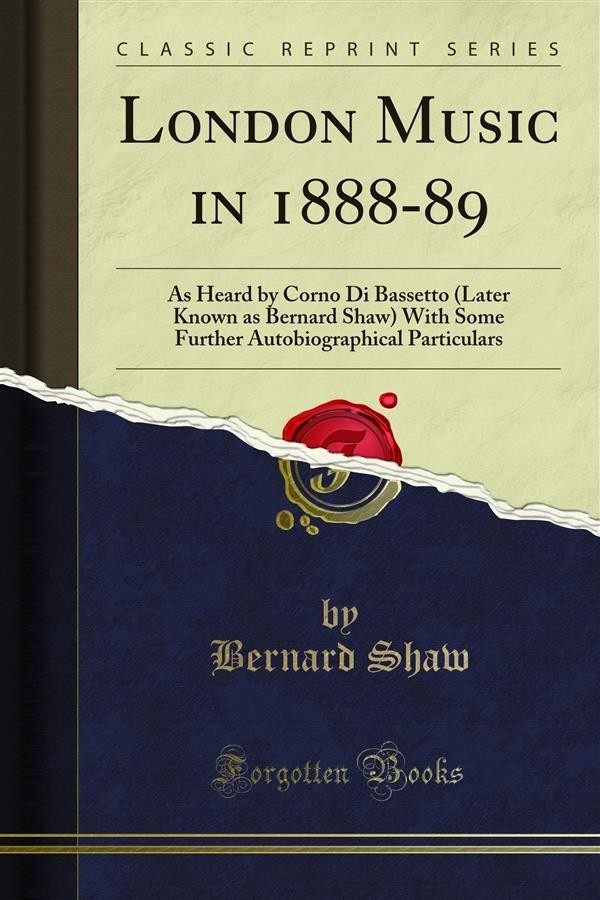 When my maiden novel, called Immaturity, was printed fifty years after it was written, I prefaced it with some account of the unhappy-go-lucky way in which I was brought up, ending with the nine years of shabby genteel destitution during which my attempts to gain a footing in literature were a complete and apparently hopeless failure.<br><br>I was rescued from this condition by William Archer, who transferred some of his book reviewing work to me, and pushed me into a post as picture critic which had been pushed on him, and for which he considered himself unqualified, as in fact he was, So, as reviewer for the old Pall Mall Gazette and picture critic for Edmund Yates's then fashionable weekly, The World, I carried on until I found an opening which I can explain only by describing the musical side of my childhood, to which I made only a passing allusion in my Immaturity preface, but which was of cardinal importance in my education.<br><br>In 1888, I being then 32 and already a noted critic and political agitator, the Star newspaper was founded under the editorship of the late T. P. O'Connor (nicknamed Tay Pay by Yates), who had for his very much more competent assistant the late H. W. Massingham. Tay Pay survived until 1936; but his mind never advanced beyond the year 1865, thou his Fenian sympathies and his hearty detestation of the English nation disguised that defect from him. Massingham induced him to invite me to join die political staff of his paper; but as I had already, fourteen years before Lenin, read Karl Marx, and was preaching Socialism at every street comer or other available forum in London and the provinces, the effect of my articles on Tay Pay may be imagined. He refused to print them, and told me that, man alive, it would be five hundred years before such stuff would become practical political journalism.