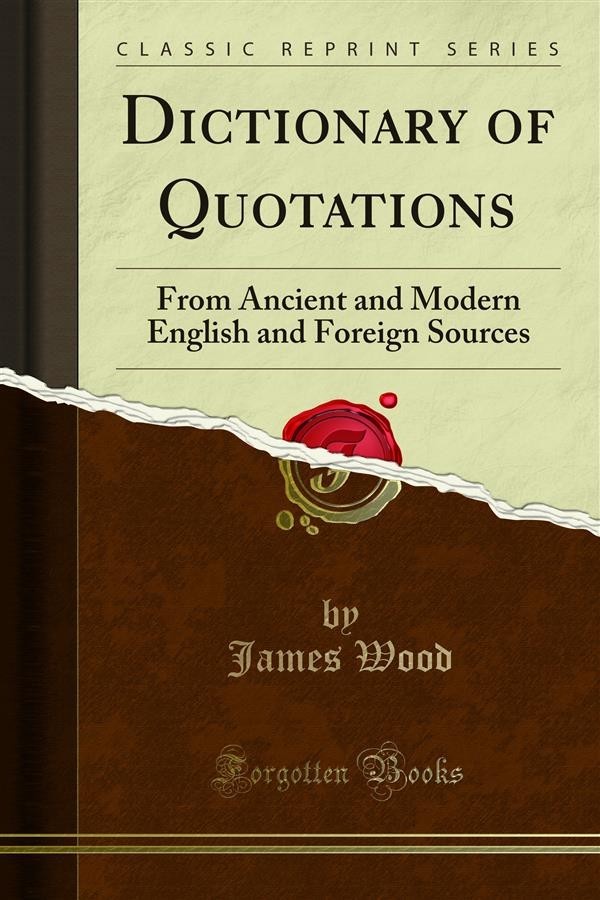 Except in the case of quotations from Shakespeare, the reader will observe that the Editor has quoted only the names of the authors or the books from which they are taken, and has not, as might be expected of him, supplied either chapter or verse. The reason is, he did not think it worth the labour and expense that would have been involved in doing so, while the quotations given are for most part independent of the context, and are perfectly intelligible in their own light. They are all more or less of an aphoristic quality, and the meaning and application are evident to any one who understands the subject of which they treat. As for the other qualities of these quotations, they will be found to be in general brief in expression and pointed in application, and not a few of them winged as well as barbed. A great many are pregnant in meaning; suggest more than they express; and are the coinage of minds of no ordinary penetration and grasp of thought. While some of them are so simple that a child might understand them, there are others that border on regions in which the clearest-headed and surest footed might stumble and come to grief. The collection might have been larger; the quarry of the literature of the present century alone might have supplied materials for as big a book. But the Editor's task was to produce a work that should embrace gleanings from different fields of literature, and he could only introduce from that of the present day as much as his limits allowed. Yet, though the quantity given is no index of the quantity available, the Editor hopes the reader will allow that his selection has not been made in the dark, and that what he has given is 'of the true quality, as well as enough in quantity for most readers to digest. If the quality be good, the quantity is of little account, for what has been said of Reason may be said of Wisdom which is its highest expression: Whoso hath any, hath access to the whole.