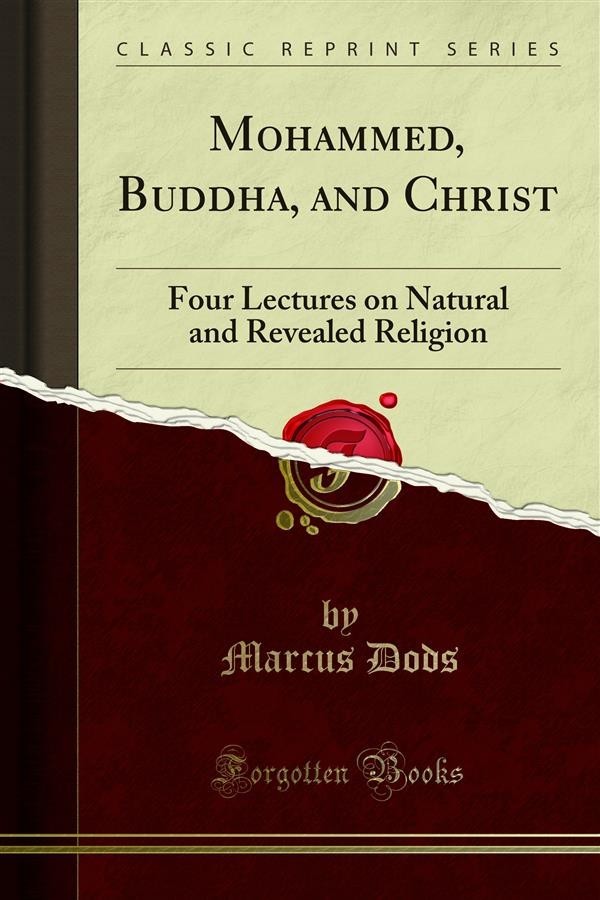 If you like firebrand ministers delivering strongly worded sermons, then you'll want to dive in to <i>Mohammed, Buddha, and Christ: Four Lectures on Natural and Revealed Religion</i> by Marcus Dods, a theologian and professor of New College in Edinburgh. This book presents four of his lectures about Mohammed, Buddha and Christ and the religions they founded, but the book is not a comparative study of the respective practices of the three great religions. In keeping with his position in the United Free Church of Scotland, Dods forcefully argues for the moral superiority of Christianity. <br><br>Dods presents two lectures on Islam. Some religious practices of Islam are discussed and praised, like regularity of prayer, almsgiving, and religious holidays. But most of the two lectures is devoted to things that Dods finds deficient about the religion. Dods is critical of the concept of Paradise and criticizes polygamy and marriage laws. He also condemns Mohammed's treatment of women. The second lecture on Islam begins with a brief historical review of the religions of Arabia. He offers the opinions of philosophers like Voltaire and Carlyle and then vigorously disagrees with them. He writes that there is little to admire about Mohammed, and declares the religion was spread by violence and conquest rather than due to positive virtues. However, Dods does praise Islamic contributions to art and literature.<br><br>Dods is more circumspect about Buddhism. He describes the religion as one that is not devoted to a supernatural deity, and devotes several pages to relating the compelling story of Buddha's life . He praises Buddhists for their charitable natures, which he feels are similar to the ethics of Christians, however, Dods considers Buddhist philosophies as atheistic and leading to polytheism. <br> <br>The lecture on Christianity is entitled "The Perfect Religion." Dods sets up his argument by discussing what makes a religion real, true and the product of divine revelation. He concludes that Christianity is the one true religion and ends the book by surmising that the Arabs are too barbaric to properly receive Christian missionaries. <br><br>These lectures contain arguments that will be shocking to some modern readers, while at the same time, some of Dods' arguments are still debated today. <i>Mohammed, Buddha and Christ: Four Lectures on Natural and Revealed Religion</i> is probably most useful to readers as a snapshot of Christian thought about other religions in 19th Century Europe.