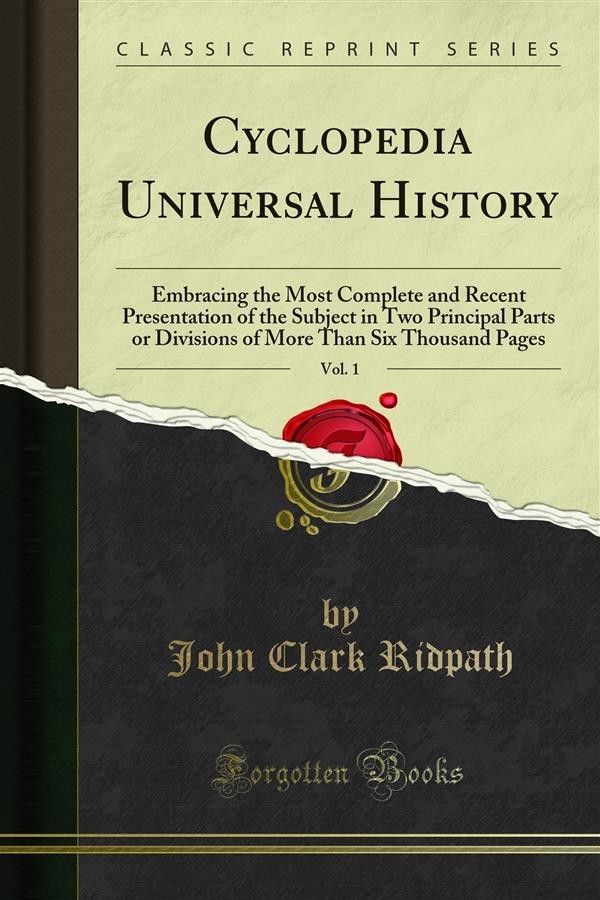 Within the present century the motives for writing History have been greatly intensified. First of all, the vision of the historian has been considerably widened by the enlargement of geographical knowledge and the establishment of the hitherto uncertain limits of cities and states. By this means not a few of the puzzling and contradictory aspects of the old-time annals have been brought into clearer light and truer proportion. More particularly in Ancient History has accurate geographical information contributed to the completeness and perspicuity of the narrative.<br><br>The rectification of Chronology, also, has gone forward with rapid strides, and the result has been no less than the writing anew of whole paragraphs in the earlier chapters of human history. If to this we add the splendid achievements in the department of Archaeology, in deciphering the hitherto mute records of antiquity, and in interpreting the significance of the architectural monuments so abundant in most of the countries where civilization has flourished, we shall find a large, even an imperative, motive for reviewing and re-writing the records of the Ancient World.<br><br>It is, however, most of all, the Scientific spirit of the nineteenth century which has demanded, at the hands of the historian, an additional guaranty for the accuracy of his work. This spirit is abroad in all the world, and prevails most, of all in the highest departments of human thought and activity. It has not hesitated to demand that History shall become a science. It has challenged or rejected the value of all historical writings that are not pervaded with the scientific method and modeled on the inductive plan. All this is well; the historian must scrutinize the foundations of his work and the validity of his structure.<br>It is to motives such as these that the great historical works of our century owe their origin. But for such reasons, Wilkinson, Ebers, Rawlinson, Duncker, and Curtius had never written; and the world would still be blindly following the unsifted stories of old. Thus much may be said, then, as to the general reasons for writing History.<br><br>The more particular motive which the Author of the present work has to offer to the public for undertaking the composition of a book so comprehensive as the title indicates, is this: A desire to bring within the reach of the average reader a concise and accurate summary of the principal events in the career of the human race. The historical works produced in our century have nearly all been in the nature of special studies, limited in their scope to a particular epoch. The result has been that the works in question are so elaborate in detail and so recondite in method, that the common reader has neither courage to undertake nor time to complete them. Before a single topic can be mastered, he finds himself lost in a labyrinth. The synthesis of different periods, treated by different authors, seems impossible; he turns in discouragement from the task; and to him the history of the past remains a sealed fountain.<br><br>It has thus come to pass that the average citizen, who, in the United States at least, is expected to have accurate general views on historical questions, may reasonably plead in bar that the historians, by not considering the limits of his time and opportunity, have put the required knowledge beyond his reach.<br><br>Be it far from me to say aught in disparagement of the learned labors of our great historians. They have fairly deserved the plaudits of mankind.