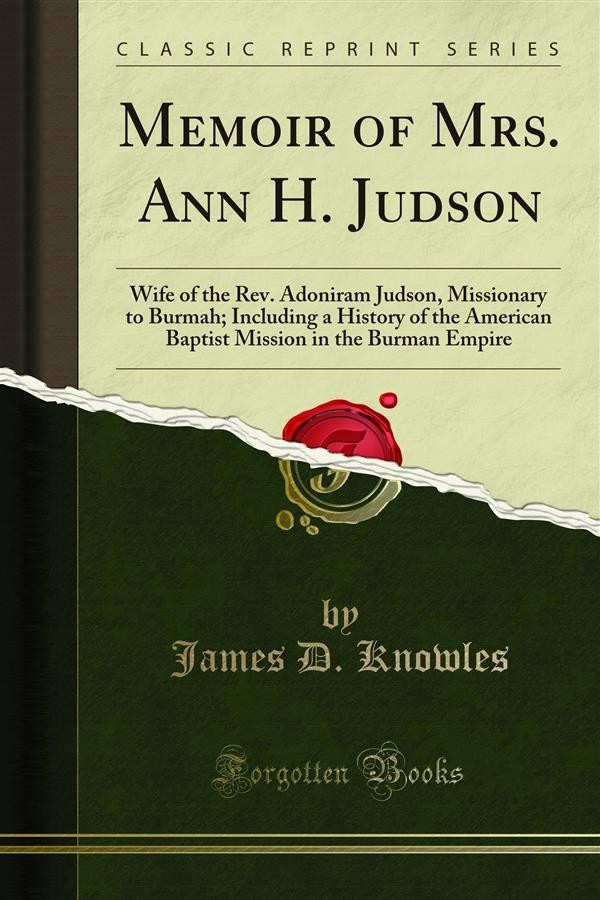 He acknowledges, with gratitude, the kind assistance which he has received from several individuals, and particularly from the parents and other relatives of Mr. And Mrs. Judson. To the materials which they have supplied, the work is in debted for much of its interest and value. It is much to be regretted, that the greater part of the pri vate journals of Mrs. Judson, and other valuable papers, were destroy. By herself, at Ava, at the commencement of the war, in 1824, to prevent them fi'om falling into the hands of the Burmans. The extracts from her journals, which are quoted in this work, were found by her husband, among her papers, and were by him transmitted to this coun try. They have never before been published. It ought to be here stated, that it was thought desirable to connect with a Memoir of Mrs. Judson, a History of the Bur man Mission. Her life is indeed a history of 'that Mission, up to the period of her death. Her valuable Letters to Mr. Butterworth are out of print; and this Memoir contains the only connected narrative, which can now be obtained, of the rise and progress of the Burman Mission. Of the usefulness of such a narrative, no doubt can be entertained. Informa tion concerning the real condition and wants of the heathen world must be spread among the churches, before they can be excited to a proper state of feeling in regard to missions. Christians, therefore, may serve the cause of the Redeemer, by circulating authentic accounts of the deplorable situation of the heathen nations, and statements of the nature, designs, and progress of the benevolent efforts which Christians are now making for the conversion of the world. It is hoped, that such an account of Burmah and of the Burman Mission will be read with interest, and will operate beneficially on the public mind. Care has been taken to make this narrative as concise as possible. It is, of necessity, for the most part, a compilation fi'om letters and documents, portions of which have before been published; bilt it is believed that those who have read them will peruse them again with increased pleasure in their connected form. The History is continued to the present time, in order that this book may be a complete record of all the important facts relating to the Mission, up to the latest dates from Burmah.