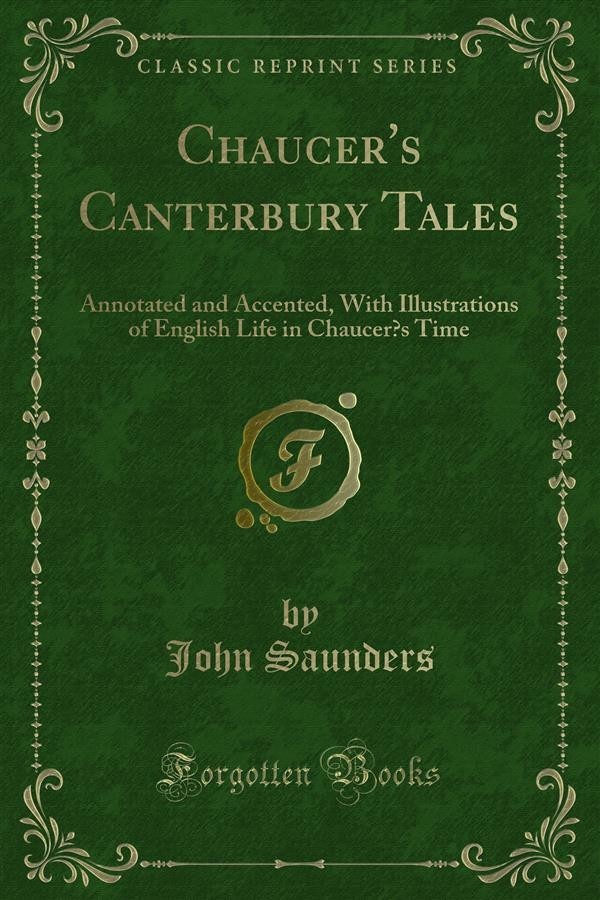 Geoffrey Chaucer is one of the most notable English poets of all time and is sometimes referred to as the Father of English literature. He lived during the fourteenth century and was a noted author, philosopher, alchemist, and civil servant. His most well known work is <i>The Canterbury Tales</i>, which are published here as part of <i>Chaucer's Canterbury Tales, Annotated and Accented – with Illustrations of English Life in Chaucer's Time</i>.<br><br>Saunders' book is not merely a collection of Chaucer's work. Rather, the editor and author has included nearly two hundred pages of contextual information on the life of Chaucer, and the characters, settings, and time periods that are detailed in <i>The Canterbury Tales</i>. Specifically, these introductory chapters are devoted to discussions of The Tabard, chivalry, religion, professional men, and trade and commerce.<br><br>Following this introduction, the stories that together form <i>The Canterbury Tales</i> are presented. Structured as a Pilgrim story-telling contest, these tales are written in both verse and traditional prose. The tales are highly critical of English society and in particular the role of the Church. In all fourteen works from <i>The Canterbury Tales</i> are included in this collection, along with four of Chaucer's works from other collections. Each story is presented alongside remarks from John Saunders, who helps to analyze the story for the modern reader.<br><br><i>Chaucer's Canterbury Tales, Annotated and Accented – with Illustrations of English Life in Chaucer's Time</i> is a collection of some of the most revered and influential writing in the history of the English language. This book is a must read for anybody who appreciates modern literature and is interested in the work of one of its founding fathers.