Preparation for Death, or Considerations on the Eternal Maxims 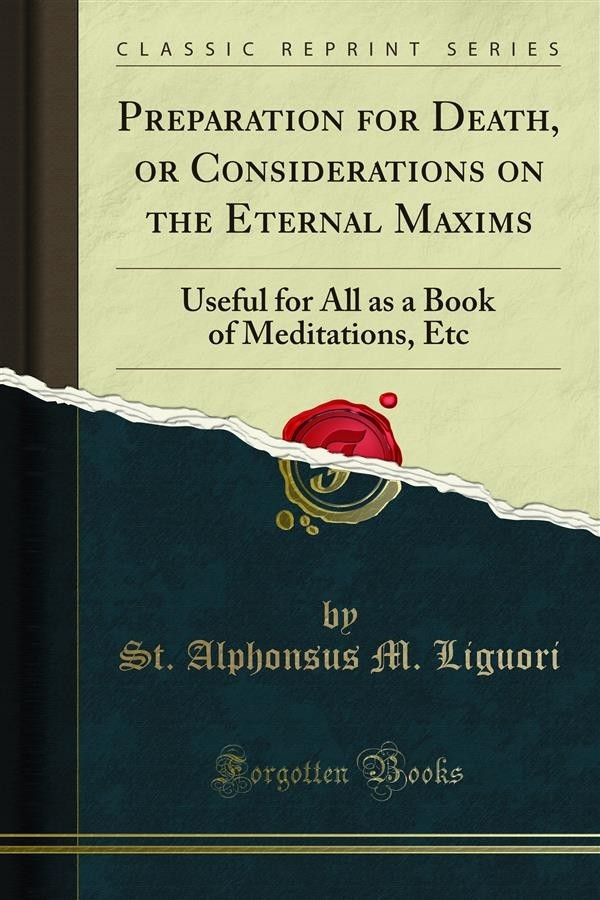 Preparation for Death, or Considerations on the Eternal Maxims

<i>Preparations for Death, Or Considerations on the Eternal Maxims</i> is a philosophical and religious work written by Saint Alphonsus Maria De Liguori. Saint De Liguori was a Catholic Bishop of Italian descent who lived during the eighteenth century. <br><br>This work represents De Liguori's ruminations on the topic of death. The book is intended to prepare the reader for the death that is "imminent for all humans". The author remarks early that no individual can escape death, and that we must thus be prepared for death at all times. The book is divided into considerations, which each examine a specific aspect of dying. These considerations are examined in three parts, each discussing said consideration from a different angle, intended to make the subject matter approachable by those in any stage of life. Every section begins with a quote from scripture and closes with a series of prayers. In all, the author examines thirty-six distinct considerations.<br><br>Saint Alphonsus Maria De Liguori's work is the writing of a wise man. His prose is simple and encourages the reader to enter an almost meditative state. While this book may appeal primarily to practicing Catholics, De Liguori efforts to make his work approachable by non-believers as well. Few writers could tackle such a challenging topic and pull it off the way De Liguori has.<br><br><i>Preparations for Death, Or Considerations on the Eternal Maxims</i> is a deeply affecting book on coming to terms with mortality and preparing for the inevitable. It is a reminder of the fleeting nature of existence, and the importance of living a good life. As a tool to improve one's life by preparing for death, Alphonsus Maria De Liguori's book is highly recommended.