From Doniphan to Verdun 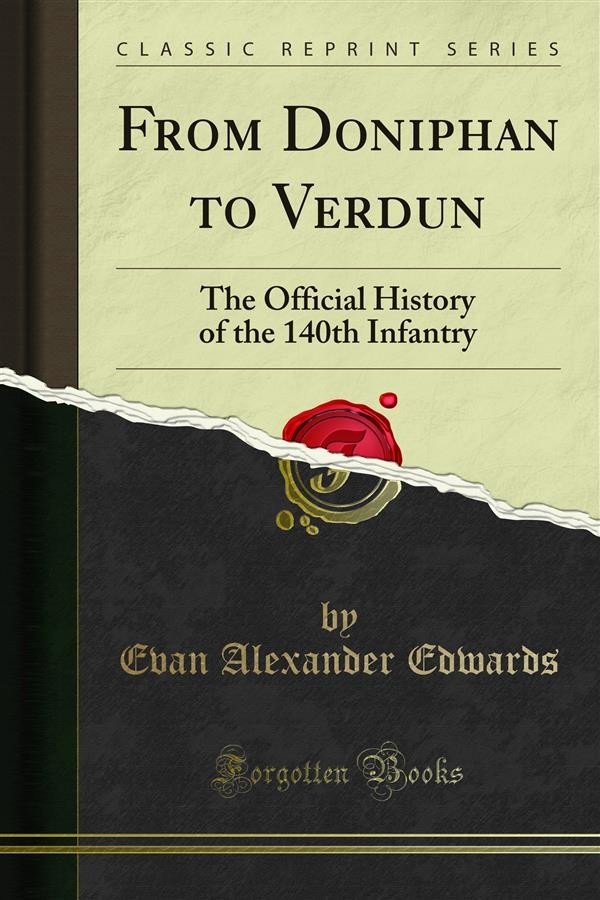 From Doniphan to Verdun

Take a map of the United States. Draw two lines cutting a wide strip down the center from North to South. This section will cover the territory whose drafted men showed the finest physical and mental standard. On either side East and West the percentage of drafted men passing the physical examination ranged from 50 to 65 percent. But in these Middle Western States the percentage ranged from 60 to 80, and in most cases well above 70 percent. The broad stretches of country with men working in the open, and the small number of large cities may account in part for this, but it does not account for the spirit of the men. In the l40th Infantry there was a strength, a purpose, a power coming from the disciplined combination of a large number of strong men. A National Guard organization, part of it had gained some experience. But all of its men were eager to go to the defense of the National Honor, and when the supreme test came they fought and died wonderfully. The reason is to be found in their ancestry and rearing. Their fathers were strong men; their mothers were brave women. Cities stand today where a generation ago there were open fields. It is but a short while since this was virgin country. The forbears of these men were pioneers. Strong and virile, generous and just, quick to defend their rights, eager to seize what they desired, their faults and virtues alike great. Conquering anew country, they grew apt in meet ing emergencies, accustomed to bloodshed, fearless and determined. They were representatives of the Great American Spirit. And they bequeathed to their sons ruddy health, courage, strength, and a loyal love for the Nation. When the time came these men proved worthy of their sires. The regiment was all-missouri, but it had many Kansas men. Lt. Col. Lemmon, Captain Grigg, Captain Rexroad, Lt. Reid, Lt. Sulli van, Lt Eustace Smith, the Chaplain, and more than 400 others hail ed from the Sunflower state.