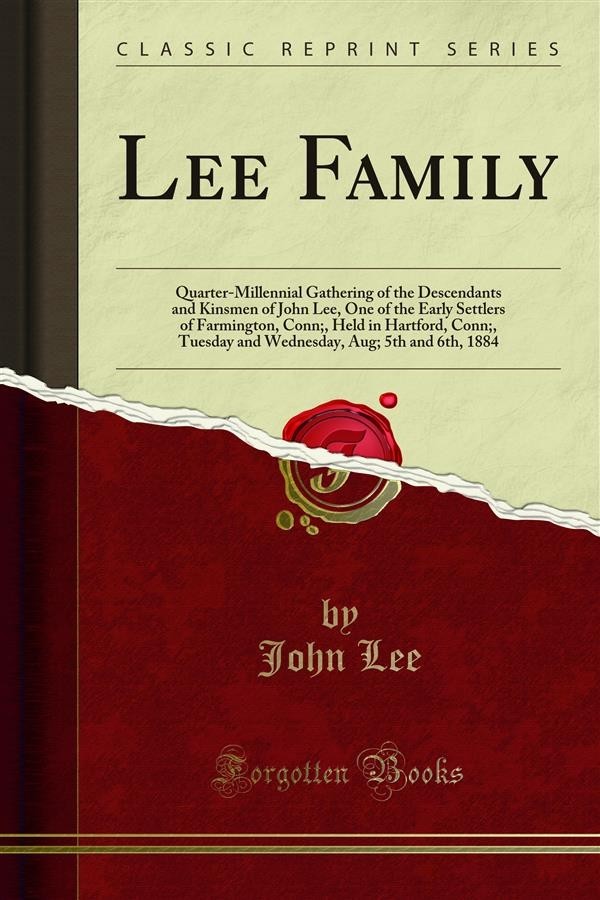 Those who have the lee book, and are familiar with its con tents, will, perhaps, wonder that the sketch of the descendants of Thomas (the twin) should appear as it does, out of the regular order, but the reason therefor will appear as follows I had never heard of any attempt to trace out the Farmington Lees until, in the Autumn of 1878, when I casually heard from a friend, who was employed in the oﬂice where the work was being done, that there was in progress a history of our family. This seemed to me strange, for all my life had been passed in Connecticut, and I certainly was not unknown in the community. I had spoken on many platforms in defence of republi can principles had again and again appeared as an advocate of total abstinence in different localities had been active in Free Masonry and Odd Fellowship, and had been the official head of both orders in Connecticut. To this day I am unable to explain or guess the reason why, in all the researches of Deacon Charles and Rev. Samuel Lee, my family was entirely overlooked, living, as we always had, within thirty miles of the old home at Farmington, where my grandfather was born, and from which town he went as a soldier at the age of sixteen, to join the Army of the Revolution. I had long felt an ar dent desire to know more than I did concerning my ancestry and kindred, and when the work appeared, was an eager purchaser and reader. After becoming somewhat familiar with it, it occurred to me that a family gathering was both desirable and feasible. I knew that other old families had held such gatherings, which had been pleasant occa sions and were fondly remembered some of them were the Hunting tons, Burwells, Tuttles, Andrews, Harrisons, Barnes, and several others that might be mentioned.