Record of the Harris Family Descended From John Harris, Born in 1680 in Wiltshire, England 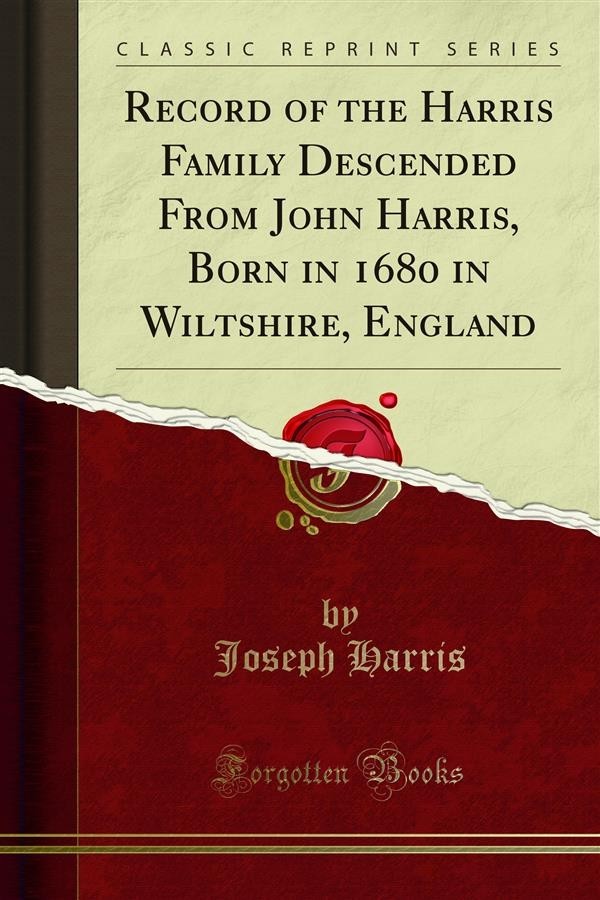 Record of the Harris Family Descended From John Harris, Born in 1680 in Wiltshire, England

IN 1898, when I did not know that I should ever have the leisure requisite to put into shape the genealogical material that has been accumulating in my hands during the last thirty years, I printed some notes on the ancestry of my children, thinking that they would at least furnish a clue to anyone who might hereafter become interested in the subject of the history of any of the families whose career is therein sketched, and might desire to make it the subject of a further study. The leisure which I then lacked has since come to me, and has enabled me to prepare a more complete account than is contained in the earlier book, of that branch of the Harris family which is descended from John Harris, born about 1680, in Wiltshire, England, through his two sons, John and Thomas, born, respectively, in 1717 and 1722. No record such as this can justly claim completeness or perfect accuracy. In the course of two hundred years some branches of a family stray away beyond recognition, and there are other branches, the members of which, who, though known, do not sympathize with the undertaking of making a family record, and will not, therefore, contribute their quota of information. And in many cases no accurate records have been kept, and the several accounts obtainable do not entirely harmonize. I have been most fortunate in finding many members of the family who have each been willing to take great pains to furnish full information as to that portion of the record which specially concerns each of them, and to the labors of these persons it is largely due that it has been possible to make so much of a history of the family as is contained in the following pages. The record is fairly complete down to the generation of the great — great grandchildren of the John Harris above named, which generation is called in the following pages the nineteenth; and as many persons of this generation are still living there should be no difficulty in each branch of the family carrying on for itself the record if it shall so desire.