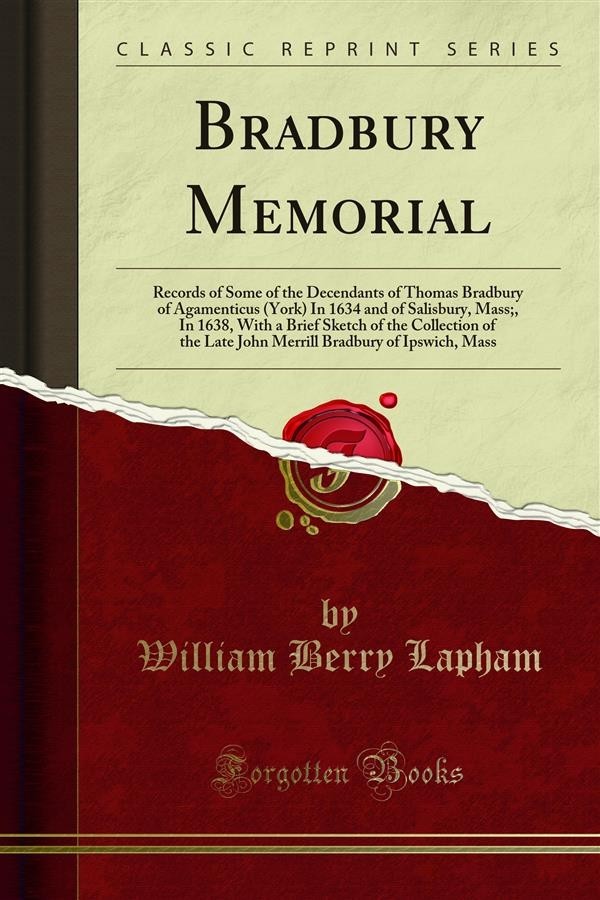 IT was nearly forty years ago that the late john merrill bradbury, of Ipswich, Mass, began to collect materials for a Genealogy of the Bradbury Family. That his purpose was to make it one of the most complete and exhaustive family histories ever published, is abundantly shown by his correspondence, and had he lived there is little doubt that his intentions would have been fully carried into effect. But his health failed and death supervened before his self-imposed task was half accomplished. He died nearly fifteen years ago, and since that time until quite recently, his collections have remained undisturbed in the hands of his executor. The venerable Hon. James W. Bradbury, of Augusta, had been for sometime intending to have compiled a limited sketch of his family, embracing only his own line, but after more mature deliberation and a correspondence with the executor of the late John M. Bradbury's will, who cheerfully offered to place the collections of his brother at his disposal, Mr. Bradbury concluded to modify his first intention so far as to utilize all the material attainable, with-certain limitations as to the time of publishing the work. The expense of compiling and making additions within reasonable limits, is borne entirely by Mr. Bradbury, while it is hoped that the sale of books will be sufficient to meet the cost of publication. The late Captain William F. Goodwin, of the United States army, who was connected with the Bradbury family, on the maternal side, was also interested in the history of his ancestors, and had collected more or less material bearing upon the subject, a portion of which — that relating to the York County families of this name — had been printed in Dawson's Historical Magazine. The extent of Capt. Goodwin's collections, and what disposition he intended to make of them had he lived, are entirely unknown to the compiler. The printed portion is all that has been accessible to him.