The Journal of Mental Science, 1922 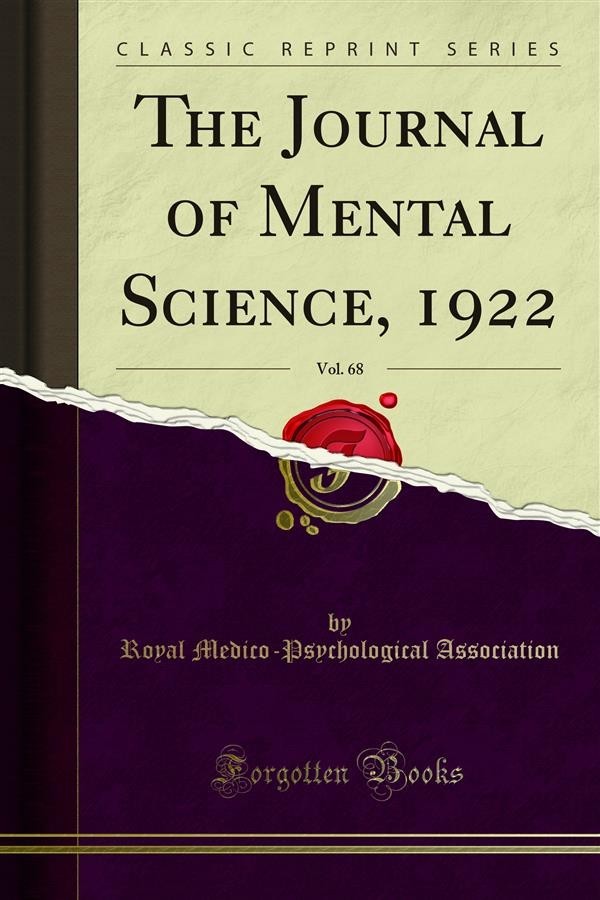 The Journal of Mental Science, 1922

In adopting our title of the ffournal of Mental Science, published by authority of the medico-psychological Association, we profess that we cultivate in our pages mental science of'a particular kind, namely, such mental science as appertains to medical men who are engaged in the treatment of the insane. But it has been objected that the term mental science is inapplicable, and that the term mental physiology or mental pathology, or psychology, or psychiatry (a term much affected by our German brethren), would have been more correct and ap pr0priate; and that, moreover, we do not deal in mental science, which is pro perly the sphere of the aspiring metaphysical intellect. If mental science is strictly synonymous with metaphysics, these objections are certainly valid; for although we do not eschew metaphysical discussion, the aim of this journal is certainly bent upon more attainable objects than the pursuit of those recondite inquiries which have occupied the most ambitious intellects from the time of Plato to the present, with so much labour and so little result. But while we admit that metaphysics may be called one department of mental science, we main tain that mental physiology and mental pathology are also mental science under a different aspect. While metaphysics may be called speculative mental science, mental physiology and pathology, with their vast range of inquiry into insanity, education, crime, and all things which tend to preserve mental health, or to pro duce mental disease, are not less questions of mental science in its practical, that is in its sociological point of view. If it were not unjust to high mathematics to compare it in any way with abstruse metaphysics, it would illustrate our meaning to say that our practical mental science would fairly bear the same rela tion to the mental science of the metaphysicians as applied mathematics bears to the pure science. In both instances the aim of the pure science is the attainment of abstract truth; its utility, however, frequently going no further than to serve as a gymnasium for the intellect. In both instances the mixed science aims at, and, to a certain extent, attains immediate practical results of the greatest utility to the welfare of mankind; we therefore maintain that our journal is not inaptly called the yournal of Mental Science, although the science may only attempt to deal with sociological and medical inquiries, relating either to the preservation of the health of the mind or to the amelioration or cure of~its diseases; and although not soaring to the height of abstruse metaphysics, we only aim at such meta. Physical knowledge as may be available to our purposes, as the mechanician uses the formularies of mathematics. This is our view of the kind of mental science which physicians engaged in the grave responsibility of caring for the mental health of their fellow-men may, in all modesty, pretend to cultivate; and while we cannot doubt that all additions to our certain knowledge in the speculative department of the science will be great gain, the necessities of duty and of danger must ever compel us to pursue that knowledge which is to be obtained in the practical departments of science with the earnestness of real workmen. The cap tain of a ship would be none the worse for being well acquainted with the higher branches of astronomical science, but it is the practical part of that science as it is applicable to navigation which he is compelled to study. — Sir C. Bucknill.