The Riddle of Life 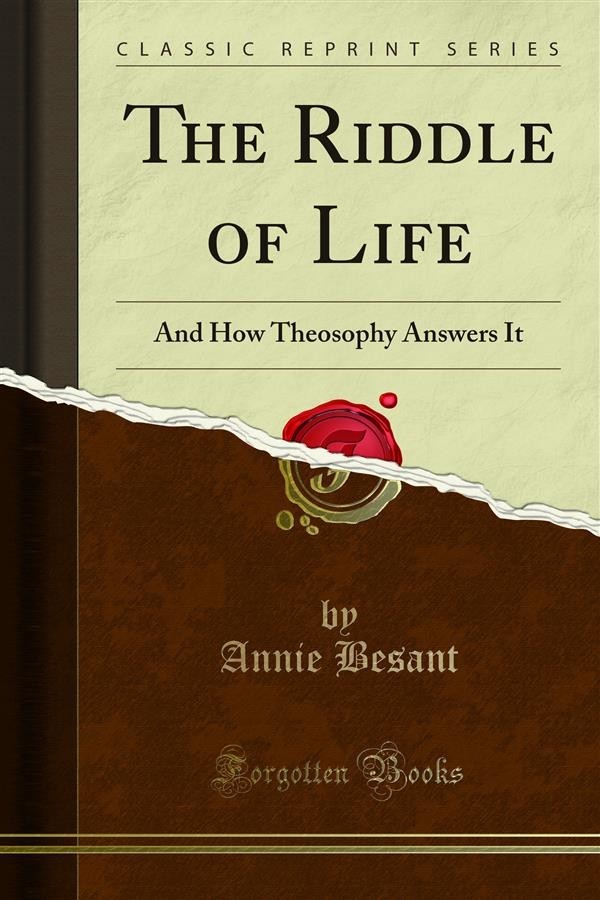 The Riddle of Life

This unity of teachings among the world-religions is due to the fact that they are all founded by members of the Brotherhood of divine Teachers, the custodian of the Divine Wisdom, of Theosophy. From this Brotherhood come out, from time to time, the Founders of new religions, who ever bring with them the same teachings, but shape the form of those teachings to suit the conditions of the time, such as the intellectual stage of the people to who-m They come, their type, their needs, their capacities. The essentials are ever the same; the non-essentials vary. This identity is shown in the symbols which appear in all faiths, for symbols form the common language of religions. The circle, the triangle, the cross the eye, the sun, the star, with many another, ever bear their silent testimony to the fundamental unity of the religions of the world. Understanding this, the Theosophical Society serves every religion within its own domain, and draws them together into a Brotherhood. In morals, Theosophy builds its teachings on the Unity, seeing in each form the expression of a common Life, and therefore the fact that what injures one injures all. To do evil 0 e., to throw poison into the life-blood of humanity, is a crime against the Unity. Theosophy has no code of morals, being itself the embodiment of the highest morality' it presents to its students the highest moral teachings Of all religions, gathering the most fragrant blossoms from the gardens of the world-faiths. Its Society has no code, for any code that could be generally imposed would be at the average low level of the day, and the Society seeks to raise its members above the ordinary level by ever presenting to them the highest ideals, and infusing into them the loftiest aspirations. It leaves aside the law of Moses to walk in the spirit of the Buddha, of the Christ. It seeks to evolve the inner law, not to impose an outer. Its method with its least evolved members is not expulsion, but reformation. The embodiment of the Divine Wisdom in an organisation gives a nucleus from which its life-forces may radiate. A new and strong link is thus made between the spiritual and the material worlds; it is in very truth a Sacrament the outward and visible sign of an inward and spiritual grace, a witness of the Life of God in Man.