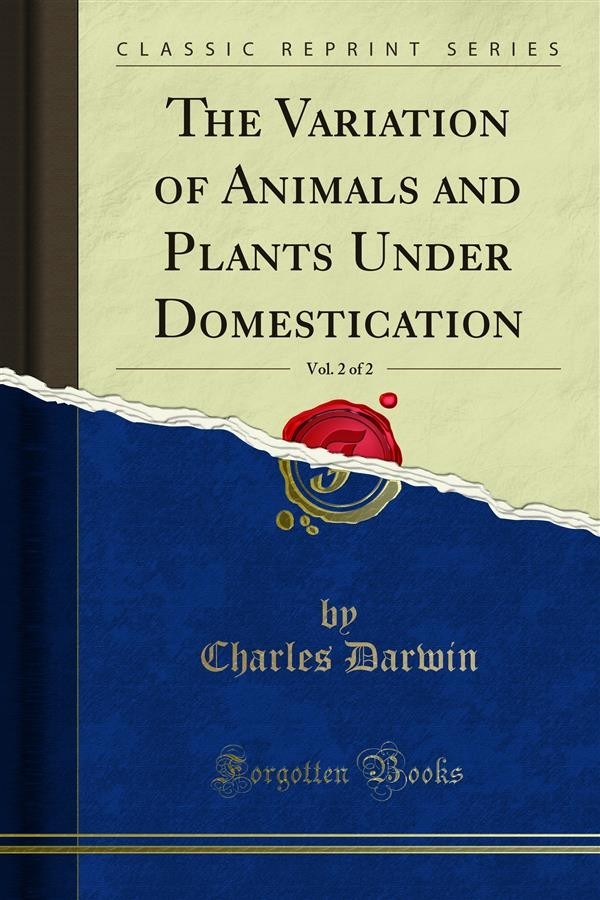 Charles Darwin was a well-known English geologist and naturalist. He is best known for his scientific theories and contributions to evolutionary theory. Arguably his most important work was his essay entitled "On the Origin of Species" which essay argued that populations of species evolve through generations as a result of the process of natural selection. His two book series entitled <i>The Variations of Animals and Plants Under Domestication</i> offers profound insight into the beliefs and evidence that established the basis for Darwin's work on evolution and the study of biology.<br><br>The domestication of animals and the domestication of plants is thoroughly explored in this book, along with Darwin's theory of heredity which discusses the passing of traits from parents or ancestor onto offspring. This theory was termed, and may be more popularly known as, pangenesis. Darwin's work with heredity is known across the globe, as he established that all species have descended, over time, from common ancestors. This concept links back to his work on natural selection as each new branch of offspring evolves beyond the traits of the common ancestor.<br><br><i>The Variations of Animals and Plants Under Domestication</i> is an intriguing book for anyone interested in Charles Darwin and his work on biology and evolution theory. For those interested in domestication and naturalism, this book is a must read, but it's also highly recommended for scholars of science and students of history as the book gives an exciting glimpse into a special period in time when evolutionary theories were the cutting-edge of scientific study.