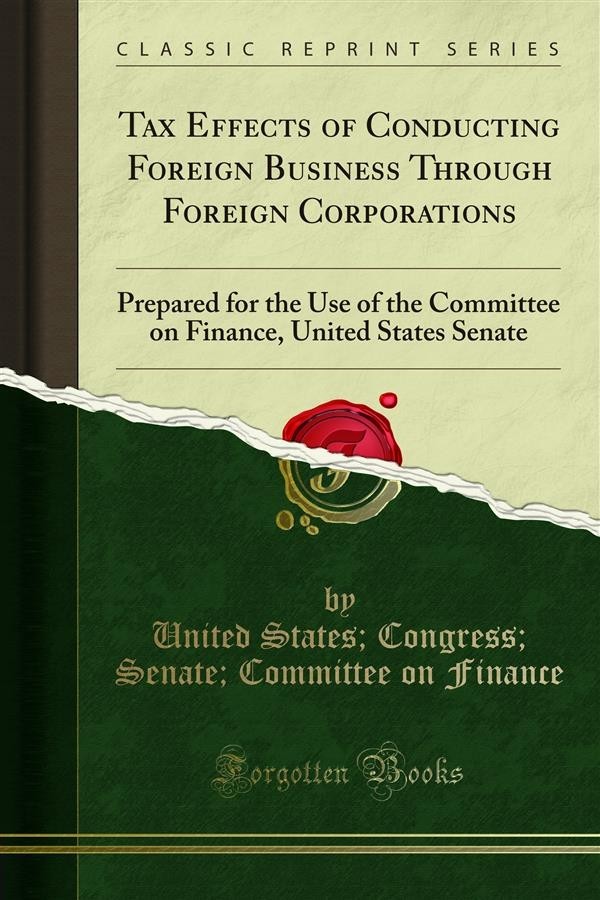 This study, which ha« been prepared for the Committee on Finance, sots forth in section I certain statistics with respect Io the Organization of new foreign subsidiaries in which U.S. shareholders have an interest and which are located in various countries of the world, with emphasis on Switzerland. Section II briefly discusses the various commercial and tax reasons for conducting a foreign business through it subsidiary Corporation organized under the laws of one or another foreign country. Section III of the report discusses some of the various types of foreign operations and the rules of present law applicable to those operations. Section IV deals with situations in which a foreign subsidiary is organized in one country but operates in one or more foreign countries. Section V discusses the abuses which do or may occur under present law.<br><br>For purposes of preparing this study, materials were collected primarily from the Office of International Operations (010), Internal Revenue Service; the recent hearings before the Committee on Ways and Means (May 3-June 9, 1961), relating to the President's tax message; and from various industry groups.<br><br>Attached to this report, as appendixes, are:<br><br>(A) The portion of the President's tax message relating to the elimination of the tax-deferral privilege;<br><br>(B) The Secretary of the Treasury's Statement, to the Committee on Ways and Means relating to the elimination of the tax-deferral privilege;<br><br>(C) The memorandum of the Commissioner of Internal Revenue, dated June 22, 1961, addressed to the Assistant Secretary of the Treasury;<br><br>(D) A letter from the Under Secretary of Commerce to the chairman of the Committee on Ways and Means, dated June 22, 1961, relating to imports and exports of foreign subsidiaries;<br><br>(E) Table I, relating to the number of foreign subsidiaries organized in 1960 and 1961 based on Information returns (form 959); and<br><br>Table II, relating to subsidiaries organized in Switzerland during the period September 1, 1959, to December 1960.<br><br>I. Extent of Growth of Foreign Subsidiaries<br><br>Sources of Information with respect to the number of foreign subsidiaries which are owned or controlled by U.S. shareholders are limited. At the outset. it should be noted that. first, the staff was unable to locate any source of information which lists the total number of all foreign subsidiaries owned or controlled by U.S. shareholders in the various countries of the world.