Journal of an Embassy From the Governor-General of India to the Courts of Siam and Cochin China, 1830 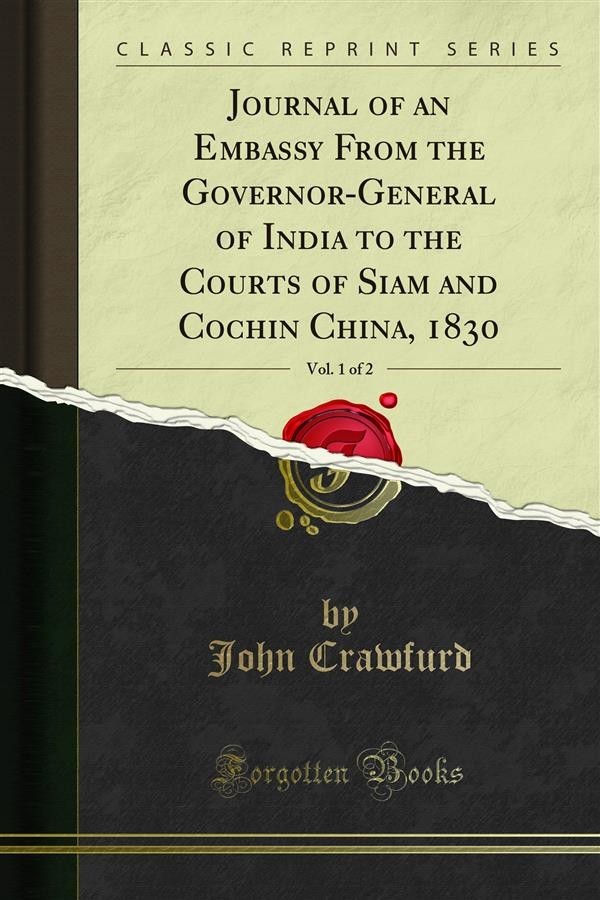 Journal of an Embassy From the Governor-General of India to the Courts of Siam and Cochin China, 1830

View of the Town and Roads of Singapore; Map of Siam and Cochin China; Malay Man and Woman; View of the City of Bangkok; Siamese Man and Woman; Civil and Military Cochin-Chinese Mandarins in their dresses of ceremony; Ordinary Mode of Conveyance of Persons of Rank in Cochin China; Cochin Chinese Priest of Fo, Noviciate and Devotee; Eight National Portraits; Siamese and Pali Alphabets, &c. &c.; Pegu and Lao Alphabets, &c. &c.; Plan of the City of Bangkok; Cochin Chinese Lady and Mandarin of the Civil Order; King of Cochin China, and Deputy Governor of Kamboja; Map and Plan of Singapore; Wood Cuts; Front of the Main Building of the King of Siam's Palace; White Monkey in the Elephant Stables; Siamese Temple; A Prahchidi, or Sacred Spire; Spire of the Temple called Wata-naga; Cochin-Chinese State Boat; A Siamese Temple at Bangkok; Gautama represented dead, with one of his Disciples worshipping him; Cochin-Chinese Temple, near Saigun; Idol and Painting in a temple of Gautama, or Fo, at Faifo; Cochin-Chinese boats in the Bay of Turan; Vocabularies