A Homiletic Commentary on the Book of Ecclesiastes 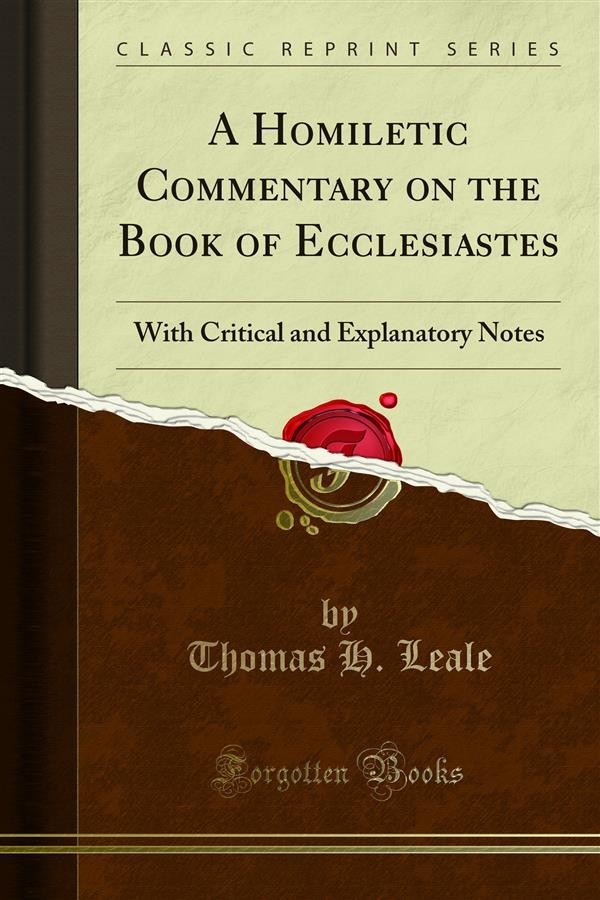 A Homiletic Commentary on the Book of Ecclesiastes

Ecclesiastes is the Greek name given to this Book by the Seventy, as the interpretation of the title Koheleth which it bears in the Hebrew Canon. The meaning of this designation is, on the whole, well represented by the equivalent term, "The Preacher," which our Translators have supplied. The Authorship is generally ascribed to Selomon. But the adventurous spirit of modern criticism has sought for reasons of dissent from this view. These are founded chiefly upon some peculiarities in the Author's language - such as the employment of so many Aramaic words - and upon its representation of Jewish national life, which, it is alleged, is not a fitting description of the joyous times of Israels most prosperous and magnificent king. It is, therefore, suggested that the Book was written by some Jew of a later age, who, in order to invest it with importance, assumed the name and style of Solomon. But such literary expedients, though employed by other nations, were not the usual practice of the Jews, and whenever resorted to, were discouraged. To us, the excess of evidence weighs in favour of the view that Solomon was the writer. The Jews have always regarded this Book as his production, as such it was received by the early Christians, nor did any one dispute this opinion before Grotius. In the Superscription "The Preacher" proclaims who he is, and the illustrations, evidently drawn from scenes of life in which he was the chief actor, correspond with all that we know of the manner of his life. His restless activity in building and planting, his severe strictures upon women, his unwearied pursuit of knowledge and wisdom, and his endeavours to instruct the Church by means of short and pointed sayings, clearly identify the writer with Solomon. This Book bears internal evidence that it was written after his repentance. Such a nature as his would fall an easy prey to the seductive influence of the talents and riches of other nations. Solomon imitated their splendour, adopted their social customs, and even their idolatrous rites; or - as we think more strictly - became indifferent, regarding all religion as equally true.