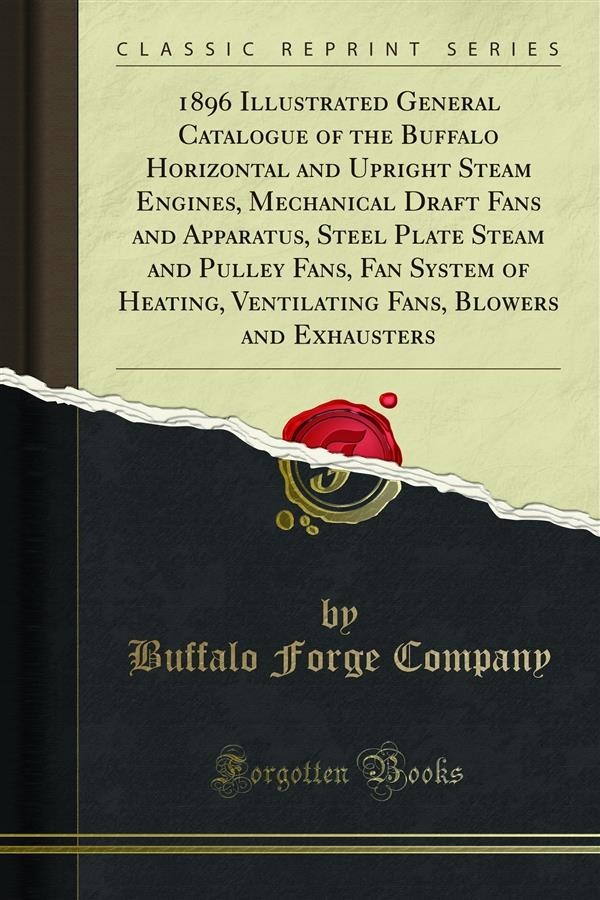 The usual machinery catalogue, being largely confined to mechanical description and construction, contains little information valuable in engineering lines; and in placing the output of most iron manufactories, less illustration of application and uses is required than in the case of air-handling apparatus. While a comparison of the present book with the last will indicate a marked advance, if the progress of an establishment is to be judged solely by its new catalogues, as is often wont, then this publication falls far short of fulfilling that duty.<br><br>Our general catalogue preceding this issue was compiled in 1892. It possessed many unique features, prominent among which was the presentation of a large amount of data hitherto unavailable and relating mainly to the application of Buffalo Blowers and the Fan System of Heating, Ventilating and Drying. Several large editions, duplicate of the original, have been necessitated to supply the demand from engineers and architects at home and abroad. Such marked favor naturally appeals to us to further enhance, in a like manner, the value of the present work. The new and original matter herewith presented in forms of practical value, we believe will accomplish the desired end admirably.<br><br>The facts and figures embodied herein are derived from actual installations of the various apparatus to which they relate. Being compiled from actual test records, they are not to be compared in value with the theoretical calculations commonly published; such at the best are unreliable. Most extensive experiments, under varied conditions, involving the use of the most refined and accurate instruments at no small outlay, constitute the material from which the several tables and rules are established.<br><br>New and extensive fields for Blowers and Hot Blast Apparatus constantly develop. Especial study of the problems incident thereto, with tests, are promptly begun and continued by experts of long experience until an economical and reliable basis for calculating the proper sizes and applications is reached. Purchasers and engineers thereby derive authentic information not obtainable elsewhere.<br><br>Many new designs of the various machines embraced in our output will be noticed, together with a number of improved previous ones. The unblushing copies from our 1892 catalogue found in manufacturers' circulars of later date, are most forcible admissions of the acknowledged superiority of Buffalo goods. Our entire time, with the resources of a plant unequaled by any similar one in the world, either in extent or completeness of equipment, is entirely devoted to the improvement of old and the perfection of new types in the various lines, and to our customers' interests. The best obtainable grade of materials and workmanship, coupled with the highest utility of design, have characterized the unparalleled success of Buffalo Forges. In every product of our plant the same features are paramount. Content always to let our work speak for itself, through the practical medium of machines installed, nothing further is asked than an unbiased investigation of the records made thereby.