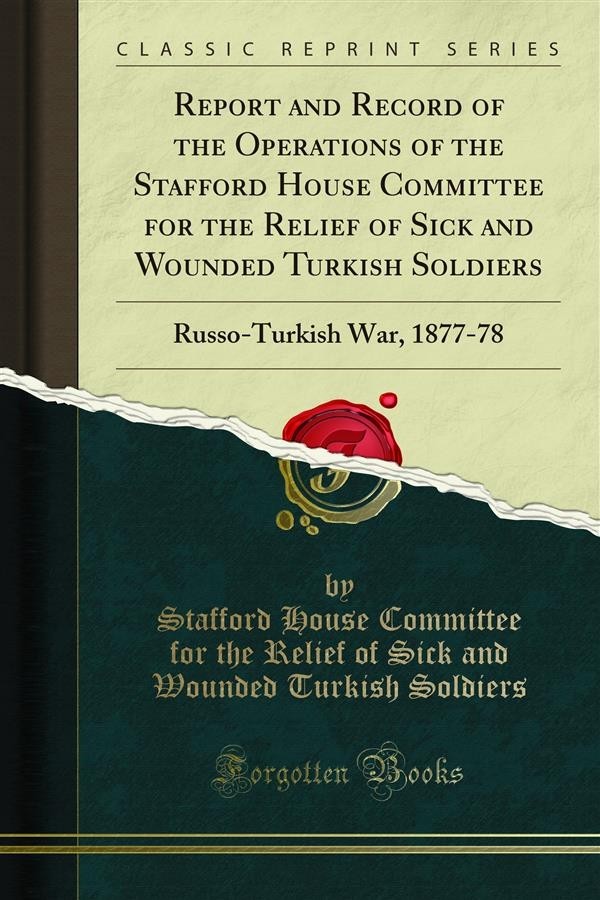 On December 12, 1876, the Duke of Sutherland invited some friends to Stafford House to consider what steps could be taken to alleviate the great sufferings which prevailed amongst the Turkish soldiers. From well-informed sources it was ascertained that the hardships these men were patiently enduring were extreme: without tents or other covering than their ragged uniforms, they had to pass days and nights incessantly exposed to rain, sleet, and snow; while the medical arrangements for the sick were of the worst description, and the medicines scanty and ill-assorted.<br><br>Under these circumstances it was decided to form a Committee, of which the Duke of Sutherland was unanimously elected Chairman, for the purpose of inviting subscriptions from the public with a view to supplying the sick and wounded Turkish soldiers with warm clothing and medicines.<br><br>At a general meeting of the Committee it was decided that the undertaking should bear the name of 'The Stafford House Committee for the Relief of Sick and Wounded Turkish Soldiers.'<br><br>About this time it became known that another Committee, under the Chairmanship of Lord Stanley, of Alderley, having similar objects, was in existence, and the gentlemen composing it offered their co-operation, which was cordially accepted. The funds, however, which they had collected, amounting to £1,100, had already been forwarded to Turkey, and placed at the disposal of Ahmed Vefyk Pacha.<br><br>Major-General Sir Henry Green was requested to act as Treasurer, and Mr. Thomas Gibson Bowles as Honorary Secretary. The latter, however, owing to pressure of other important business, retired in the following July, and Mr. Henry Wright continued to perform the duties of the office.<br><br>Messrs. Drummonds, Smith Payne & Smith, Barnett Hoare & Co., and King & Co. kindly consented to receive subscriptions.<br><br>Messrs. Taylor, of the Depository, Pimlico, undertook to store, free of charge, any goods sent to their care.<br><br>Messrs. C. Hanson & Co., of Constantinople, also offered their services to receive and distribute any stores and money entrusted to them, and Mr. Alexander Carnegie to convey gratuitously goods belonging to the Committee by his steamers to Constantinople, while the Turkish Government agreed to pass all goods free of duty.<br><br>The proper distribution of the stores on arriving in Turkey was a matter of considerable importance, and the Committee did not feel justified, until they ascertained the amount of support they might receive from the public, in sending out an agent of their own.