The Treasury of David Containing an Original Exposition of the Book of Psalms; A Collection of Illustrative Extracts From the Wh 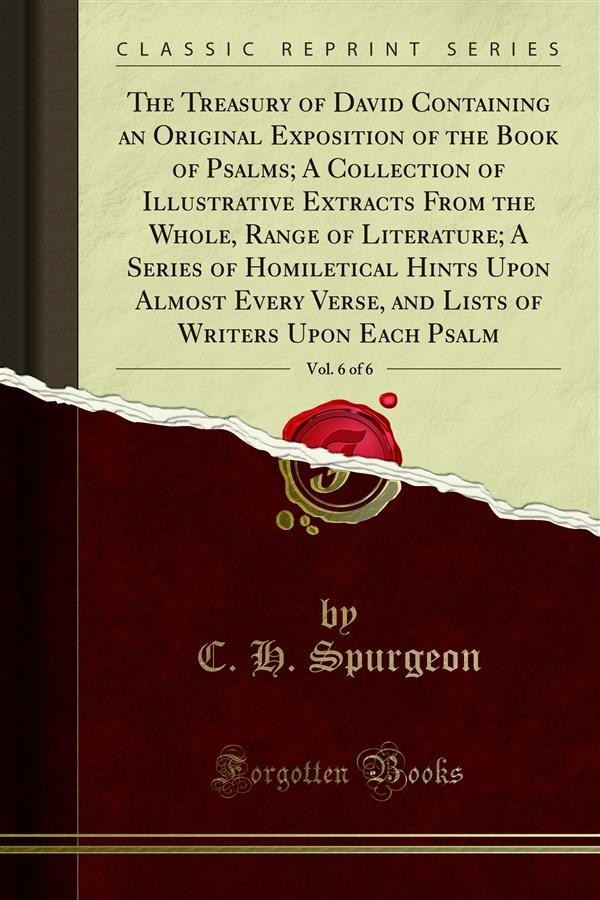 The Treasury of David Containing an Original Exposition of the Book of Psalms; A Collection of Illustrative Extracts From the Wh

At the end of all these years the last page of this Commentary is printed, and the final preface is requested. The demand sounds strangely in my ears. A preface when the work is done? It can be only nominally a preface, for it is really a farewell. I beg to introduce my closing volume, and then to retire with many apologies for having trespassed so much upon my reader's patience.<br><br>A tinge of sadness is on my spirit as I quit "The Treasury of David," never to find on this earth a richer storehouse, though the whole palace of revelation is open to me. Blessed have been the days spent in meditating, mourning, hoping, believing, and exulting with David! Can I hope to spend hours more joyous on this side of the golden gate. Perhaps not; for the seasons have been very choice in which the harp of the great poet of the sanctuary has charmed my ears. Yet the training which has come of these heavenly contemplations may haply go far to create and sustain a peaceful spirit which will never be without its own happy psalmody, and never without aspirations after something higher than it yet has known. The Book of Psalms instructs us in the use of wings as well as words: it sets us both mounting and singing. Ofter have I ceased my commenting upon the text, that I might rise with the Psalm, and gaze upon visions of God. If I may only hope that these volumes will be as useful to other hearts in the reading as to mine in the writing, I shall be well rewarded by the prospect.<br><br>The former volumes have enjoyed a singular popularity. It may be questioned if in any age a commentary so large, upon a single book of the Bible, has enjoyed a circulation within measurable distance of that which has been obtained by this work. Among all orders of Christians "The Treasury" has found its way unrestrained by sectarian prejudice - another proof of the unity of the spiritual life, and the oneness of the food upon which it delights to feed. The author may not dare to be proud of the generous acknowledgments which he has received from men of all sections of the church; but, on the other hand, he cannot pass over them in ungrateful silence. Conscious as he is of his many literary sins of omission and of commission in these volumes, he is yet glad to have been permitted to do his best, and to have received abundant encouragement in the doing of it. Of all its good the glory is the Lord's; of all its weakness the unworthy author must bear the blame.<br><br>This last portion of the Psalms has not been the easiest part of my gigantic task. On the contrary, with the exception of The Songs of Degrees, and one or two other Psalms, these later hymns and hallelujahs have not been largely expounded, nor frequently referred to, by our great divines. Failing the English, a larger use has been made of the Latin authors; and my esteemed friend, W. Durban, B.A., has rendered me great service in their translation. It would astonish our readers if they could see what tomes have been read.