History and Reminiscences of Denton County 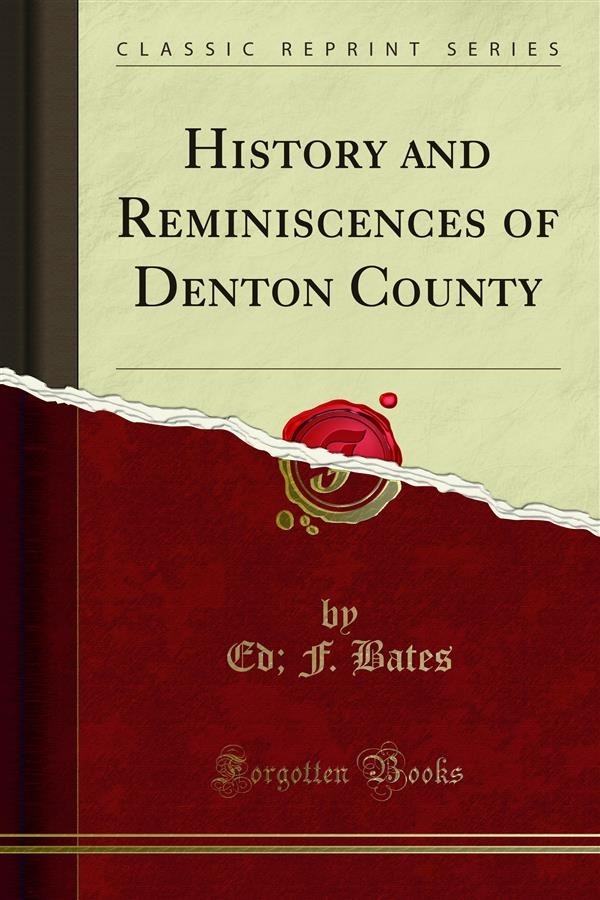 History and Reminiscences of Denton County

In writing the history of Denton County and her pioneers, the task was found hard because of the fragmentary nature of her written history, and on account of having to harmonize the discrepancies in her traditional history as related by the remaining pioneers.<br><br>All of the early public records of the county were destroyed Christmas week, 1875, when the courthouse burned.<br><br>Much of the county's traditionary history has been consigned with her pioneers to the grave. The gathering and collecting of facts and the elimination of fiction have had our most careful attention. But where so many conflicts in statements existed, some errors reasonably may be expected. And when writing of Denton County we must begin with it in its unorganized form as the western frontier of Fannin County; and "share and share alike" with all the counties carved out of this common territory, we must begin with its first settlement. The North American Indian claimed it as his hunting grounds; the Republic of Texas claimed it as her public domain, and through her agents, the Peters Colony, was making title, and a conflict at birth was on.<br><br>In order to separate the old settlers from the new, an "arbitrary period" had to be chosen, and for many reasons 1866 was selected as a partition denoting the cessation of the old life and the beginning of the new. It was called Reconstruction. We have found it hard to pursue our subject and properly observe the order of current events, hence we have arranged a part of it topically and a part as reminiscence. The temptation to make this a biography of a great people was overcome by the magnitude of the task, and a roll-call of all the old settlers was substituted in lieu thereof. Let the glories be shared by all in common.