History of Madison County, Iowa, and Its People 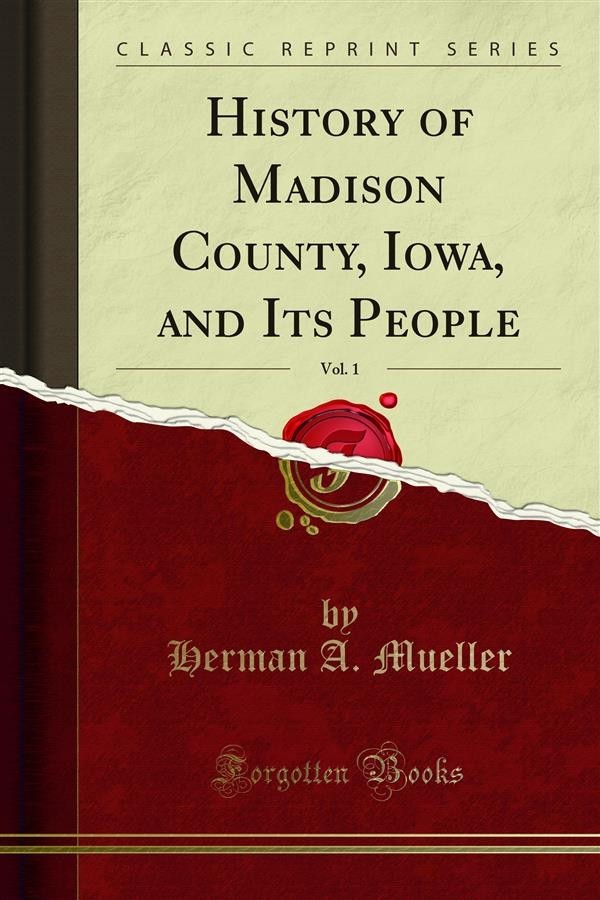 History of Madison County, Iowa, and Its People

For several years it has been my ambition to prepare and compile a History of Madison County. That time has been delayed until in the fall of 1914 when arrangements were made with The S. J. Clarke Publishing Company of Chicago to act as Supervising Editor of the first volume. Mr. W. L. Kershaw was employed to do the writing and compiling from the large source of material at hand.<br><br>The manuscripts of the late Andrew J. Hoisington, of Great Bend, Kansas, who in the year 1905 gathered much valuable material for the purpose of publishing a History of Madison County, were secured through the kindness of his sister, Mrs. Samuel Johnson, of Union Township. (Read the Life of Andrew J. Hoisington in Volume Two.) Much of the material from this manuscript was incorporated in this History.<br><br>Another source was from the material collected by the Madison County Historical Society since its organization in 1904. All papers presented before the Historical Society are preserved as well as other matter of historical value. Much of this material was drawn upon for this History.<br><br>Also the two histories, viz: Davies' History and Directory of Madison County, published in 1869, and The History of Madison County, published in 1879, were used. These two books were written at a time when many of the early pioneers were still living who knew much of the beginning of things in Madison County. Nearly all those persons have passed away, which makes the collecting of early history more difficult.<br><br>The newspaper files of the Winterset papers, especially the special historical numbers published at various times by The Madisonian, The Reporter, The News, and The Winterset Review, were freely used.<br><br>To all the above sources we make due acknowledgment for the data which was drawn upon for the present History.<br><br>We wish to express our sincere thanks to the Advisory Board for their advice and assistance rendered; also to the many members of the Madison County Historical Society who have at different times presented papers before the society. These papers have been used quite extensively in this volume.<br><br>We especially express our appreciation to the persons named below and make due acknowledgment of the same at this time. Two of them have passed away but their many kind and noble deeds live in the hearts of those who were privileged to know them, viz: W. S. Wilkinson and Mrs. Jennie Lothrop Whedon.<br><br>The names of the authors and the subjects written by them which appear in this History are as follows:<br><br>W. S. Wilkinson: "The Big Snake Hunt," "As a Boy Saw It," "Early Schools, Religion, and Politics," and "The Buffalo Mills." E. R. Zeller: Biographies of Andrew J. Hoisington and Judge J. A. Pitzer, and "History of the Kentucky Settlement."