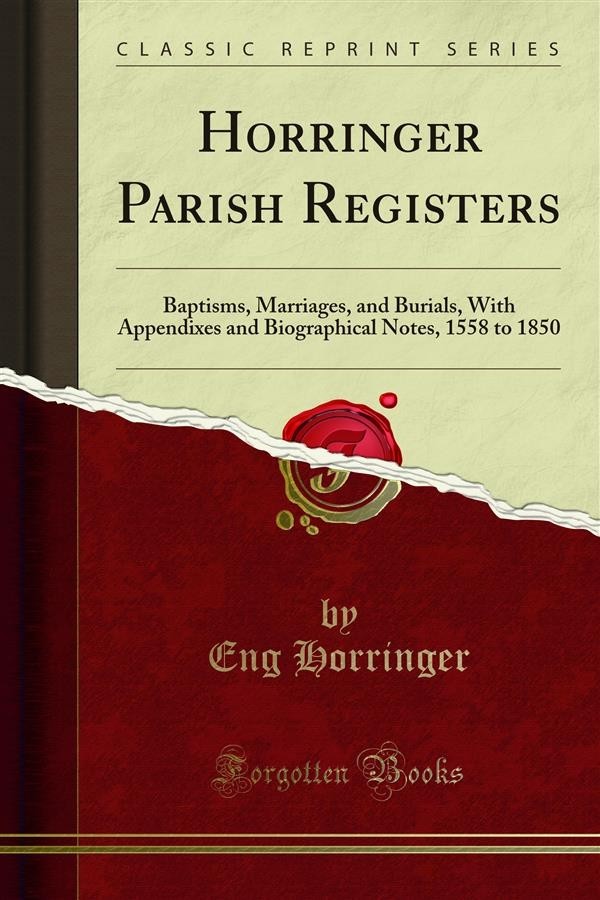 This is not the place in which to attempt to give any history of Horringer, but one or two things may be jotted down.<br><br>I. Its Name. - Horningsworth, Horningserth, Horninger, Horringer. These forms of the name will be found in successive use during the last 800 years. As time runs on names, like other things, will undergo slight changes, and those changes generally follow certain unwritten laws. In the change from Horningsworth to Horningserth, and from Horningserth to Horninger, and from Horninger to Horringer, the usual law is followed. There are other cases in which worth is corrupted into er. I have heard my father say that Ickworth used often to be called Icker, and I have heard it so called by an old man within the last few months.<br><br>But apparently in the course of the 18th century the form Horningsheath came into use, and it still more or less survives and holds the field with Horringer.<br><br>Now Horningsheath is as bad as it can be, and the sooner it is got rid of the better. For it is neither the original name, nor is it a legitimate, natural, and regular corruption of the original name. It proceeds from a mistaken idea and from false etymology. When the old English word worth dropped out of the language and people ceased to know that there had been such a word in it, then they began to think that the last syllable of Horningserth represented heath, and so they took to calling it Horningsheath. But the Domesday book of 800 years ago, and other early documents show positively that the last syllable of the name was worth and not heath. Therefore Horningsworth is right, because it is what men originally called it: Horningserth, Horninger, and Horringer are right because they are the natural and regular corruptions of the original name; but Horningsheath is wrong because it is neither the one nor the other, but the result of a false notion.<br><br>II. Meaning of the Name. - The first two syllables must represent the name of some early owner. I presume that his time lay between the rather wide limits of A. D. 500 and 900. Possibly he was an emigrant from the shores of the Baltic, and Horningsea in Cambridgeshire may be another of his possessions. The last syllable, worth, is an early English word meaning an estate of some sort.<br><br>There are certain syllables one or other of which will often be found at the end of the names of villages, such as worth, ton, stead, field, ham, and others.