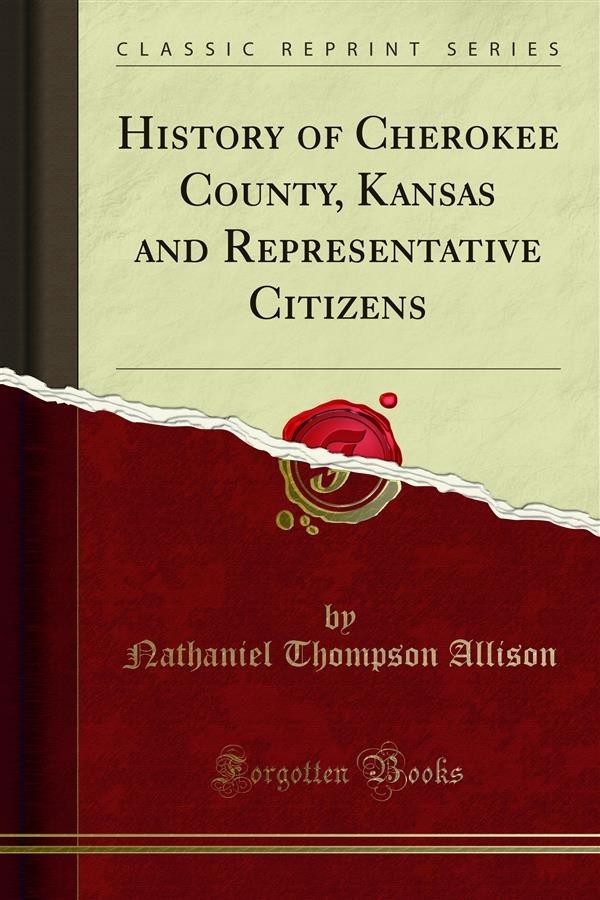 The following newspapers in the county have extended Mr. Allison many favors, and their editors have shown him every courtesy and kindly consideration: The Journal and the Tribune, at Weir City; the News and the Republican, at Baxter Springs; the Republican and the Times, at Galena; the Journal and the Miner, at Scammon; the Modern Light, at Columbus, and the Times, at Mineral.<br><br>The reviews of resolute and strenuous lives, which make up the biographical department of the volume, and whose authorship for the most part is entirely independent of that of the history, are admirably adapted to foster local ties, to inculcate patriotism and to emphasize the rewards of industry, dominated by intelligent purpose. They constitute a most appropriate medium of perpetuating personal annals and will be of incalculable value to the descendants of those therein commemorated. They bring into bold relief careers of enterprise and thrift and make manifest valid claims to honorable distinction. If "Biography is the only true History," it is obviously the duty of men of the present time to preserve in this enduring form the story of their lives in order that their posterity may dwell on the successful struggles thus recorded, and profit by their example. These sketches, replete with stirring incidents and intense experiences, will naturally prove to most of the readers of this book its most attractive feature.<br><br>In the aggregate of personal memoirs, thus collated, will be found a vivid epitome of the growth of Cherokee County, which will fitly supplement the historic statement; for the development of the county is identified with that of the men and women to whom it is attributable. The publishers have endeavored in the preparation of the work to pass over no feature of it slightingly, but to give heed to the minutest details, and thus to invest it with a substantial accuracy which no other treatment would afford. The result has amply justified the care thus exercised, for in our belief no more reliable production, under the circumstances, could be laid before its readers.<br><br>We have given special prominence to the portraits of representative citizens, which appear throughout this volume, and believe they will prove a most interesting feature of the work. We have sought to illustrate the different spheres of industrial and professional achievement as conspicuously as possible. To those who have kindly interested themselves in the successful preparation of this work, and who have voluntarily contributed most useful information and data, we herewith tender our grateful acknowledgment.