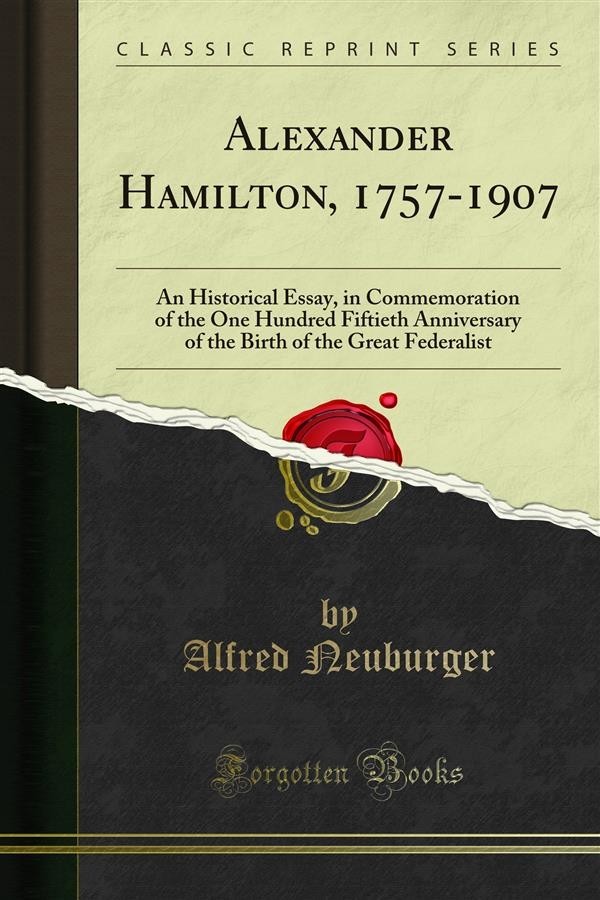 The public character of the subject, which I am presenting to my reader warrants the remark that nothing essentially new can be brought forth relating to the remarkable career of the ardent Patriot and great Statesman, Alexander Hamilton.<br><br>His life has been so much commented upon and his manner of living was so frank and exposed to the gaze of his fellow countrymen, that the Historian had comparatively an easy task to hand down to posterity a true account of his splendid achievements.<br><br>The one hundred fiftieth anniversary of the birth of Alexander Hamilton should be a new incentive to pay homage to the memory of the brilliant American, who has rendered to his country such inestimable services.<br><br>The City of Paterson, mindful of her obligations towards him. who has been her reputed founder, and in commemoration of the one hundred fifteenth anniversary of the founding of the city, has just erected a statue representing Hamilton, as he appeared to his admiring contemporaries.<br><br>The sources from which I gathered my information, (and due credit Is given them herewith), were so manifold and varied, that I lay claim only of having endeavored In as concise a manner as possible, to render an historically accurate account of Alexander Hamilton's life presenting to the reader a portrait of the great Federalist, true in every feature.<br><br>The aim of this modest volume will have been accomplished, If the perusal of its pages will bring before the reader's mental eye the colossal figure of Alexander Hamilton.