History of the Forty-Fifth Regiment 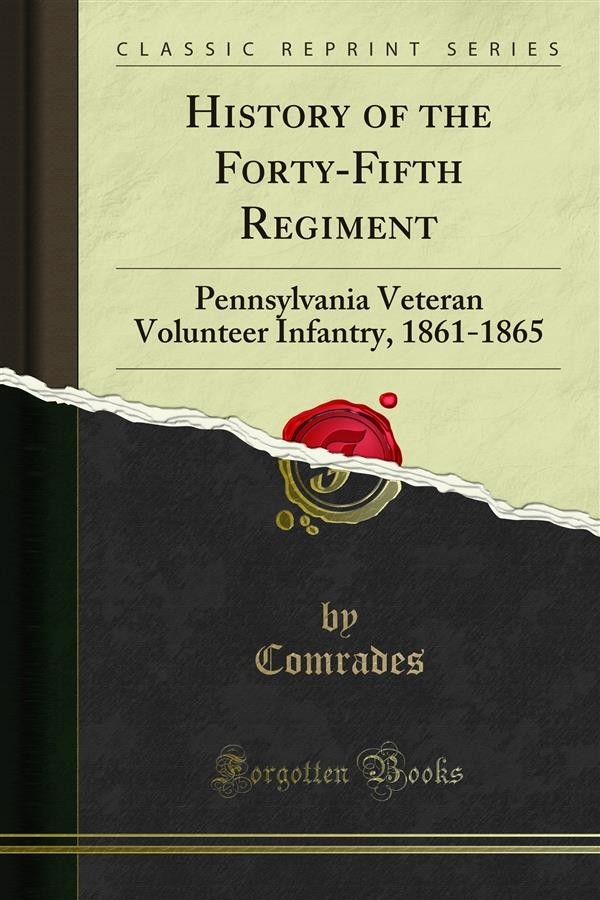 History of the Forty-Fifth Regiment

This book reminds me of the manner in which we started on many an important march. Reveille at three in the morning, fall in at four, false starts and standing in line until weary and finally off at six-thirty or later.<br><br>In the early seventies several beginnings were made to organize a movement to write a regimental history but beyond naming officers of the regimental association and historian and collecting a few dollars for expenses the attempts died an early death.<br><br>The wife of the editor had been taught patriotism in school and at home and being resolved that her children should know of the Civil War and its battles, for years commemorated the anniversaries of those battles in which her husband had participated. On the forty-fifth anniversary of the Battle of the Wilderness she called together her husband and Comrades R. C. Cheeseman, N. A. Lucas and W. A. Roberts, and their wives, and, in response to an invitation to be present in spirit if not in person, Gen. James A. Beaver wrote a letter and appealed to the comrades in the city of Washington to take up the work of a regimental history. The meeting accepted the trust, organized the Washington Association of Survivors of the Forty-fifth Pennsylvania Volunteer Infantry, with Brevet Major R. C. Cheeseman as president, A. D. Albert secretary, and W. A. Roberts treasurer. The association worked so energetically and effectively that a regimental reunion was called to meet in Williamsport. Pa., on March 2d. 1910. Some sixty of the surviving comrades answered roll call, and encouraged by the seeches of General Beaver. General J. I. Curtin, Judge R. G. Richards and others, and inspirited by the reports of the officers of the Washington Association, proceeded to elect the officers of that organization as the officers of the Regimental Association and appointed the Secretary the editor of the history. The necessary committees were also appointed, and the work progressed rapidly and favorably, handicapped, however, by the death of Major Cheeseman. March 25th, 1910. His successor was chosen in the person of First Sergeant John B. Emery, who put all of his business success and energy into the making of the history, with good results.