Orations and Speeches on Various Occasions 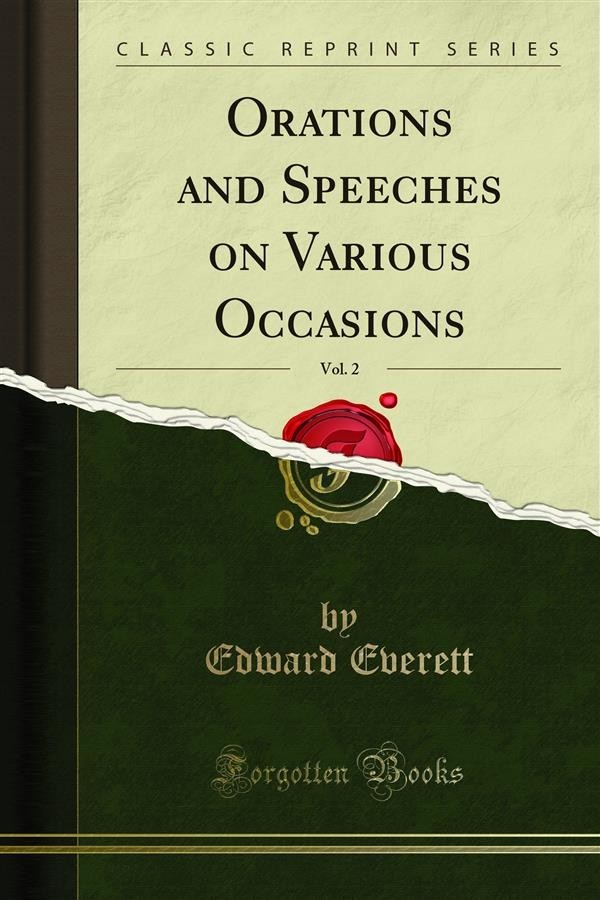 Orations and Speeches on Various Occasions

Tms volume consists, for the most part, of addrewes delivered since those contained in the first volume. The first four only are of an earlier date, and the fifth (a short speech on the Western Railroad) was originally included in the first volume. The first, second, and fourth are now for the first time published. At the time of their delivery respectively, they were hastily prepared, and it was not in my power, when the first volume appeared, to revise them with sufficient care for publication. I omitted the address before the American Institute of New York, on American manufactures, in the collection of 1836, on the ground that it might be thought to fall within the rule which I had adopted, and to which I still adhere, of excluding party politics. On further consideration, I have been led to think that the manner in which this subject is treated in this ad dreu, and in the oration at Lowell on the fourth of July, 1830, is not likely to be objected to on that ground, and that they are not out of keeping with the general character of the work. I have admitted into this volume a selection from a much larger number of short speeches made at the table at public festivals, on various occasions. I have not, of course, done this in the belief that they can have much value, even with the partial reader, as literary compo sitions. I have thought, however, that they might have an interest of a different kind, some of them as con taining allusions to historical events, and some from their connection with important public occasions and occur rences. Even the few sentences addressed to the Indian chiefs who visited Boston in 1837, and the short reply to the President of the Geographical Society in London, on the reception of the medal awarded to Dr Robinson for his standard work on Palestine, may be thought to derive sufficient interest from the occasions which called them forth, to justify their insertion. The short speeches made in England were nearly all in reply to toasts, in which complimentary reference was had to the diplomatic body generally, or to the American min ister, when he alone happened to be present. The usages of society (the same in this respect on both sides of the water) impose a certain character upon speeches made under such circumstances. A few obvious topics of remark are almost of necessity apt to be repeated. To attempt to avoid such repetition would be an unprofitable, probably an unavailing, exercise of ingenuity; but I hope it will be thought that I have not, in the speeches now alluded to, dwelt entirely in the commonplaces of such occasions.