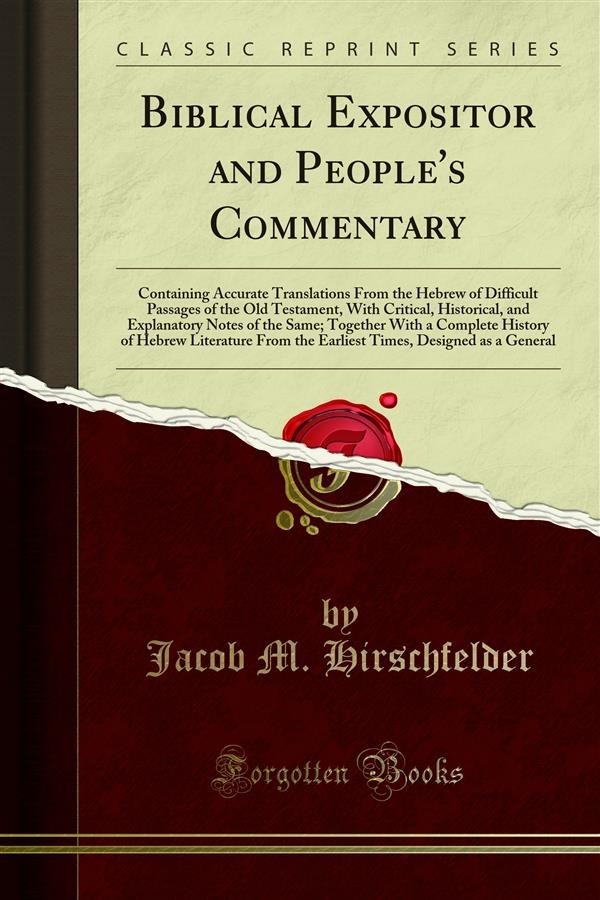 The object of bringing this Biblical Expositor before the American public is, to furnish a clear and exhaustive explanation of such passages of the Old Testament which are now, from various causes, rendered obscure in our authorized version, and more especially of such portions which of late years have been assailed. In order to accomplish this by no means easy task in the most satisfactory manner, the reader may rest assured that no labour was spared. Every passage treated on was most carefully and critically examined in the original; and every aid that could furnish information, or throw light upon the subject under consideration, was called into requisition. In treating on those portions of Scripture which modern criticism has attacked as being spurious, unhistorical, or contradictory, I have frequently made the heathen writers and the monumental inscriptions of antiquity to bear testimony to the truth of the sacred narratives. This testimony, at least, cannot be challenged by our opponents as having been influenced by preconceived opinions or prejudice.<br><br>I am by no means ignorant of the fact that the expectations of the reader in our days are not always easily gratified, yet I still cherish the hope that, although my expositions may not always in every respect prove satisfactory to all my readers, they will, at least, always be found instructive and interesting.<br><br>The poet has justly asked,<br><br>"Who can condense the Sun, or analyze the fulness of the Bible,<br>So that its ideas be gathered, and the harvest of its wisdom brought in?"<br><br>In a work surrounded by so many difficulties as is the interpretation of the Scripture, surely, the commentator may justly claim from the general reader as well as from the scrutinizing critic a generous consideration for any imperfections.