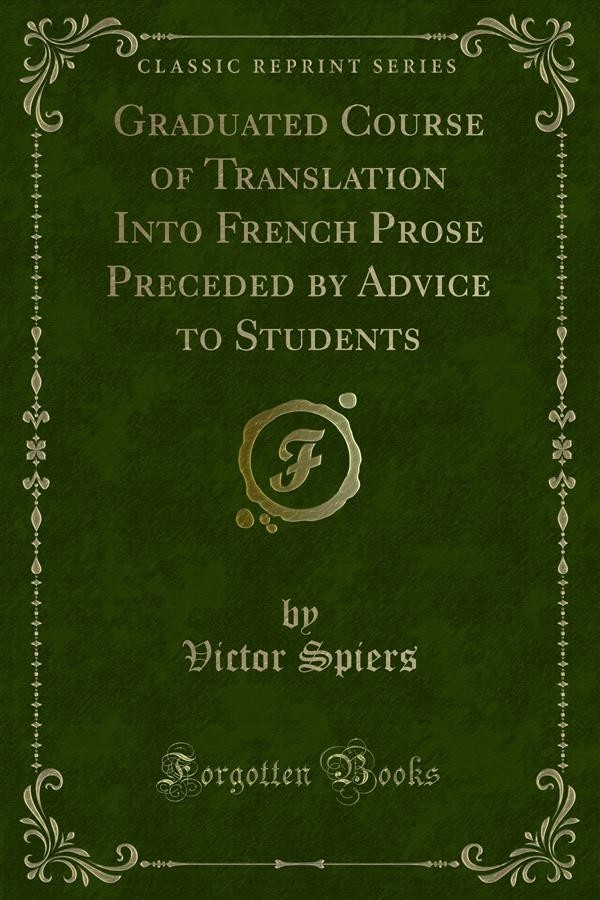 What has been done for Latin and Greek, I have attempted to do for French. I have tried not only to give a useful collection of 'proses,' but also, by means of Fair Copies, to suggest models of translation from French into English and from English into French. May both the English and the French give the impression that 'they might have been original work!'<br><br>Some pieces are translations into French by the master hand of Taine; two or three are translations into English that obtained the prize in the monthly competitions of the Journal of Education, with a few emendations; most are my own. Sometimes my endeavour to introduce grammatical and other difficulties in pieces where style is not the primary object, may detract from the style itself: here the pedagogue craves indulgence on the plea of utility. At all events I hope that my efforts, if weak in themselves, will have the fruitful result of urging others to do better.<br><br>It was suggested that this book be worked up into an 'Aid to French Prose.' The only 'talk' I have allowed myself in this fascinating subject is a few words of advice to students; and these are not theoretical; all the further guidance that I offer consists in the graduation of the pieces and in a few indications which I trust will be found practical as they are simple: - for the convenience of the master in the selection of a 'prose,' I have given in the Index a brief description of the character of the piece (philosophical, critical, descriptive, etc.) when insufficiently indicated by the title; I have marked with an asterisk the pieces which contain an unusually large proportion of grammatical and idiomatic difficulties, and have given a short list of these at the end of each Correct Version in the Key, so that at a glance the master can choose the most appropriate piece.<br><br>These 144 extracts were printed last October for the private use of my pupils, some of whom came to me knowing no French at all, some few very advanced, the generality furnished with the modest modicum that used to be known as 'Public School French.' The success of this small privately circulated edition which has been already adopted by some of our best Schools and Colleges, and the words of approval it has met from competent critics, encourage me to publish a book which, I hope, will prove practical and useful to learners and teachers of French.<br><br>These merits at any rate may be fairly claimed:<br><br>I. The pieces are mostly of a convenient length, and can be done in one or two sittings.