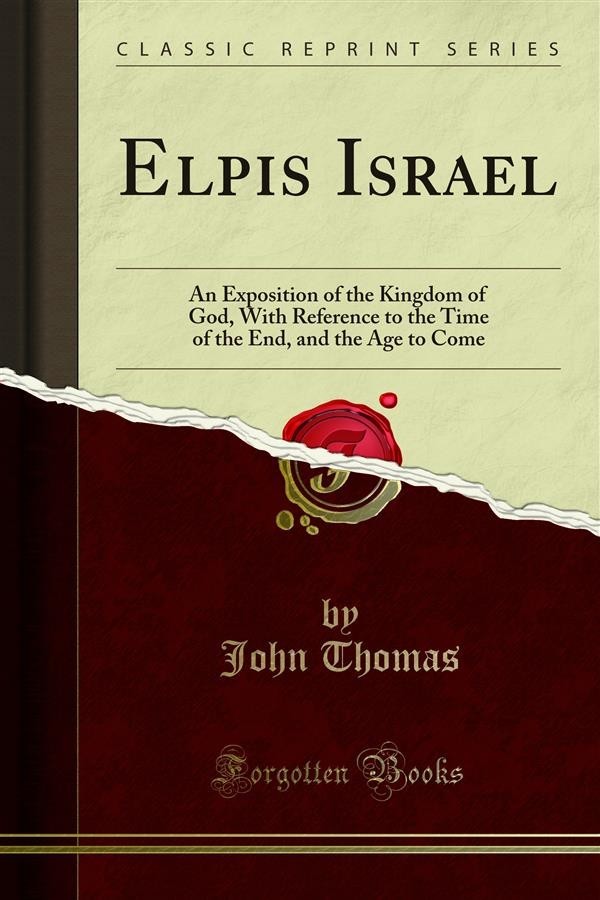 John Thomas was born in Hoxton Square, London, on April 12th. 1805. Information concerning his ancestry is meagre, and interest centres more in his work than in his extraction. He studied medicine at at early age in Chorley and London, and contributed to The Lancet occasionally as far back as 1830. His English degree, of this year's date, is M.R.C.S., his M.D. being an American degree of date 1848. Some insinuations of unfriendly critics have been met by the brief statement of facts that appears in The Christadelphian for April, 1886, page 152.<br><br>In 1832 Dr. Thomas emigrated to America, making the passage as surgeon to the ship Marquis of Wellesley. The vessel ran ashore on Sable Island, and it was supposed she would be lost with all hands. Dr. Thomas was naturally exercised as to the future state, and finding himself in a state of hopeless ignorance on the matter, resolved, if his life should be spared, that he would end the uncertainty and search out the truth union the matter.<br><br>On getting safe ashore he did not forget this resolution; and in the course of his travels, having been introduced to Mr. Walter Scott, of "Campbellite" associations, and by him convinced of the necessity of baptism, he submitted to immersion as an ordinance appointed of God. From this time onward he became involved with Campbellism and theological expositions and discussions which were altogether distasteful to him. and from which he would fain have escaped. But it was not to be. At Wellsburg, Va., in 1833. he made the acquaintance of Alexander Campbell, and was by him constrained to speak in his meeting place; which he did, on Daniel's prophecies, and on the subject of The Apostacy spoken of by Paul.<br><br>From this time forth wherever he went lie was in demand in this connection. At Baltimore, Md., and at Philadelphia, Pa., he was likewise constrained to set forth what he then believed to be the truth. At Philadelphia he set up as a medical practitioner; but his practice was somewhat hampered by the Biblical studies and speaking in which he had become involved.<br><br>In 1834 Dr. Thomas started a monthly magazine called The Apostolic Advocate, in the pages of which he manifested an understanding of the Scriptures, and especially of the Apocalypse, that was rare in those times (and, indeed, in any), and gave promise of the fruit of after years, of which Elpis Israel is a good sample.<br><br>About this time, by the growing influence of "the Word," Dr. Thomas was rapidly becoming "wiser than his teachers." and trouble ensued. He perceived that the knowledge and belief of the gospel must in God's appointments precede baptism, and was thereupon re-immersed upon the belief of what he then supposed to be the gospel, and which was certainly much nearer to it than the very rudimentary belief with which he had been immersed a few years previously.