My Attainment of the Pole 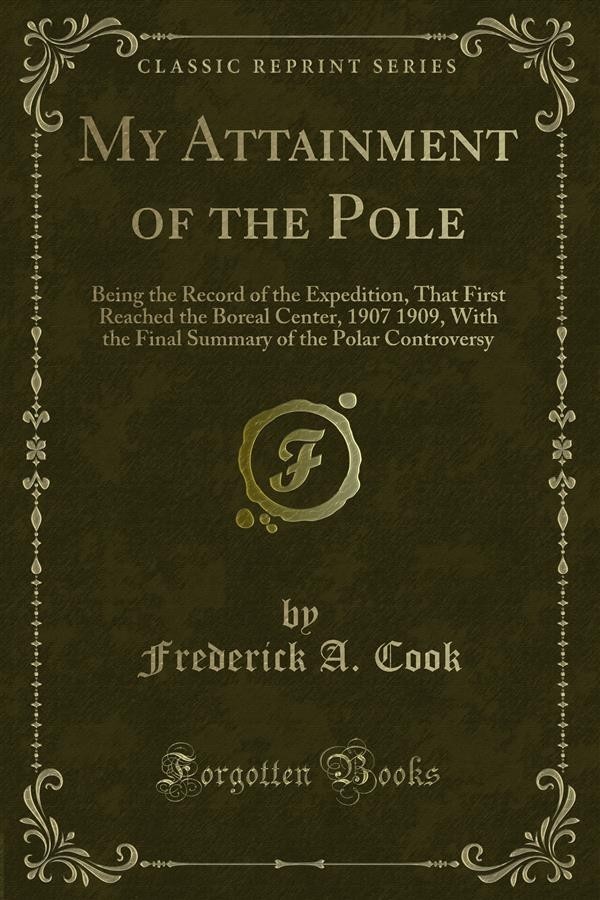 My Attainment of the Pole

In placing Dr. Cook on the Chautauqua platform as a lecturer, we have been compelled to study the statements issued for and against the rival polar claims with special reference to the facts bearing upon the present status of the Polar Controversy.<br><br>Though the question has been argued during four years, we End that it is almost the unanimous opinion of arctic explorers today, that Dr. Cook reached the North Pole on April 21, 1909.<br><br>With officer Peary's first announcement he chose to force a press campaign to deny Dr. Cook's success and to proclaim himself as the sole Polar Victor. Peary aimed to be retired as a Rear-Admiral on a pension of $6,000 per year. This ambition was granted; but the American Congress rejected his claim for priority by eliminating from the pension bill the words "Discovery of the Pole." The European geographical societies, forced under diplomatic pressure to honor Peary', have also refused him the title of "Discoverer." By' a final verdict of the American government and of the highest European authorities. Peary is therefore denied the assumption of being the discoverer of the Pole, though his claim as a re-discoverer is allowed. The evasive inscriptions on the Peary medals prove this Statement.<br><br>Following the acute excitement of the first announcement, it seemed to be desirable to bring the question to a focus by submitting to some authoritative body for decision. Such an institution, however, did not exist. Previously, explorers had been rated by the slow process of historic digestion and assimilation of the facts offered, but it was thought that an academic examination would meet the demands. Officer Peary first submitted bus ease to a commission appointed by the National Geographical Society of Washington, D. C. This jury promptly said that in their "opinion" Peary reached the Pole on April 6, 1909; but a year later in congress the same men unwillingly admitted that in the Peary proofs there was no positive proof.<br><br>Dr. Cook's data was sent to a commission appointed by the University of Copenhagen. The Danes reported that the material presented was incomplete and did not constitute positive proof. This verdict, however, did not carry the interpretation that the Pole had not been reached. The Danes have never said, as they have been quoted by the press, that Dr. Cook did not reach the Pole; quite to the contrary, the University of Copenhagen conferred the degree of Ph. D. and the Royal Danish Geographical Society gave a gold medal, both in recognition of the merits of the Polar effort.<br><br>This early examination was based mostly upon the nautical calculations for position, and both verdicts when analyzed gave the version that in such observations there was no positive proof. The Washington jury ventured an opinion. The Danes refused to give an opinion, but showed their belief in Dr. Cook's success by conferring honorary degrees.