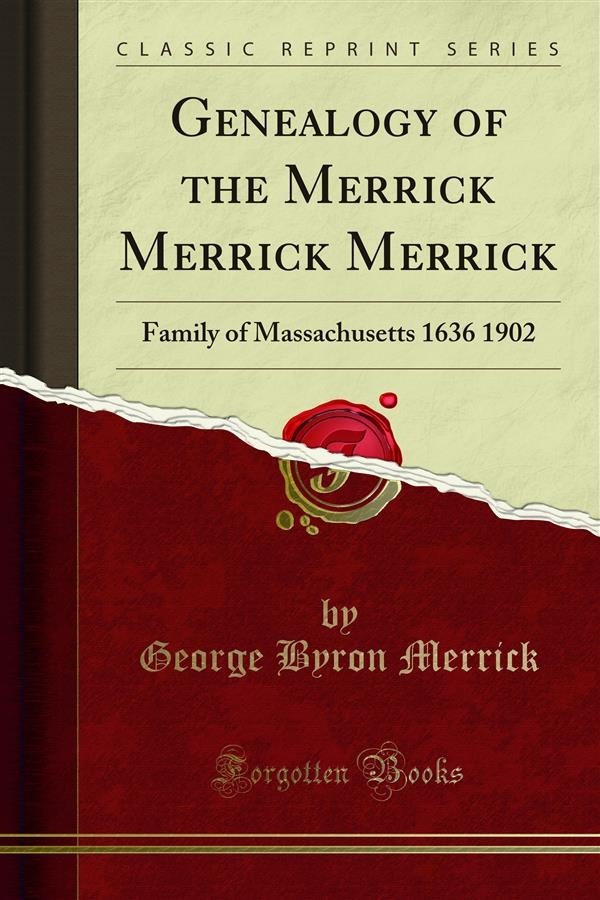 In submitting to those who bear the name of Merrick a volume bearing the title of this book, the author would anticipate the criticisms which will surely follow its examination, by the declaration that no one can possibly know its shortcomings as well as he who has put years of labor into the endeavor to fit together the hundreds of fragments which serve as a nucleus around which he has built the superstructure which he now pre~ sents to the public under the above title. From nearly every state and territory of the United States, from Canada, Ireland, England, Australia, and Hawaii have come these fragments sometimes the name of the writer and the name of his father only, without dates or names of places to serve as guides in locating the family to which he or they belonged, and it has been the work of the compiler to trace out and piece together these fragments, so far as was possible, and marshal them into families and lines of descent. In many cases this has been accomplished; very often it has failed, as a mass of unassigned names, sometimes of one generation only, in many cases of sev eral generations, will abundantly testify. The compiler has no apology to make, however, for these failures. Family records have not been kept, or if kept have been lost or destroyed by accident or lapse of time. The same is true of public records. Outside the state of Massachusetts very little attention was paid to the preservation of vital statistics in the early years; and even in that state very many records have been worn out or lost during the two centuries since the history of that state began to be written. It would be folly to claim absolute correctness in names or dates in this compilation. The name Merrick has been spelled in at least eight different ways in the old documents which enter into this work. Other names of people connected with the fam ily by marriage have been found spelled differently in different documents. Very often two and 'three different dates of birth, death or marriage have been found referring to the same event. In such cases the author has been forced to decide from the best authority available; very often he may have erred. It would be miraculous if he did not err at times. Interested parties are at liberty to decide such questions for themselves, and annotate the record according to such judgment.