The Registers of the Parish Church (St. Michael and All Angels) Of Fewston 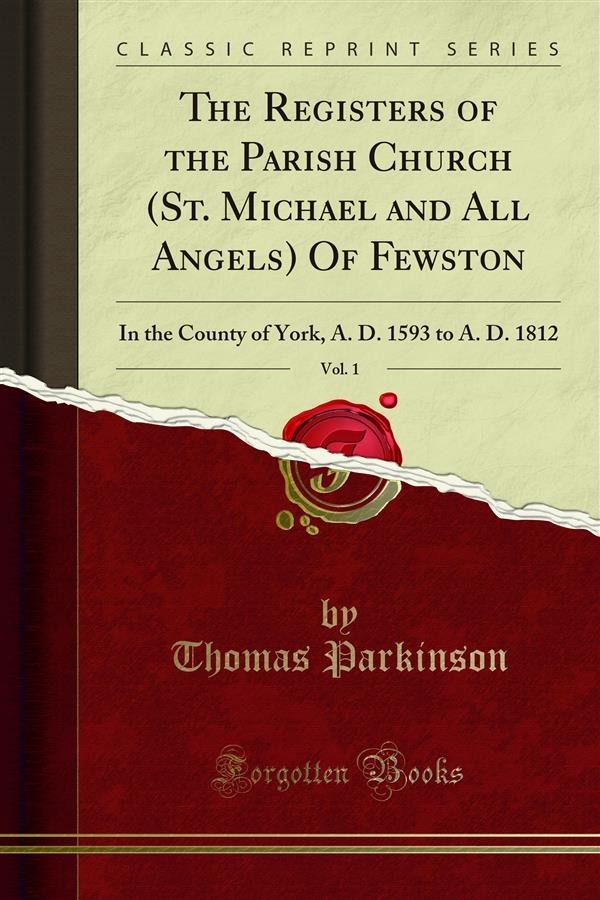 The Registers of the Parish Church (St. Michael and All Angels) Of Fewston

The ancient and extensive parish of Fewston included the Townships of Fewston, Norwood, Great Timble, Blubberhouses, and West End or Thruscross, with the Hamlets of Clifton-Elsworth, Wydrah, Spinksburn, and Hardisty Hill.<br><br>West End or Thruscross is now a separate ecclesiastical district.<br><br>Timble Little, including Swinsty, is immediately contiguous to Fewston, though legally part of the parish of Otley (7 miles).<br><br>The parish occupies the greater portion of the Washburn Valley, and formed part of the Royal Forest of Knaresbrough. The Church was at first in the patronage of the King. When the Priory of St. Robert of Knaresbrough was founded in 1256 A.D., the Advowson of Fewston seems to have been presented to it by Richard I., and from that time to the dissolution of the House in 1539 A.D., the Minister, or Prior, and Brethren presented to the living. In 1851 the Rectory was appropriated to the House, and a Vicarage instituted for the work of the parish. After the dissolution of the House of St. Robert the rectorial rights seem to have passed into private hands, while that of presenting to the vicarage again came into the hands of the Crown, which, through the Lord Chancellor, exercised it until 1890, when it passed by exchange to the Bishop of Ripon.<br><br>The Church, rebuilt (except the Tower) at the end of last century, is dedicated to St. Michael and All Angels. There was a Chantry within it dedicated to St. Mary the Virgin; and also a Chapel of Ease or Chantry at West End from very early times.<br><br>A list of the Rectors and Vicars is given on a subsequent page.<br><br>It is by the kind permission and encouragement of the present Vicar, the Rev. John Marks Ashley, LL.M., that this transcript of the ancient Register Books has been made and printed.<br><br>The transcriber is also under deep obligation to Francis Collins, Esq., M.D., for valuable assistance in collating the transcript of the earlier pages with the original, and in deciphering many difficult or doubtful readings in those pages.