The Land-Holder's Assistant; And Land-Office Guide 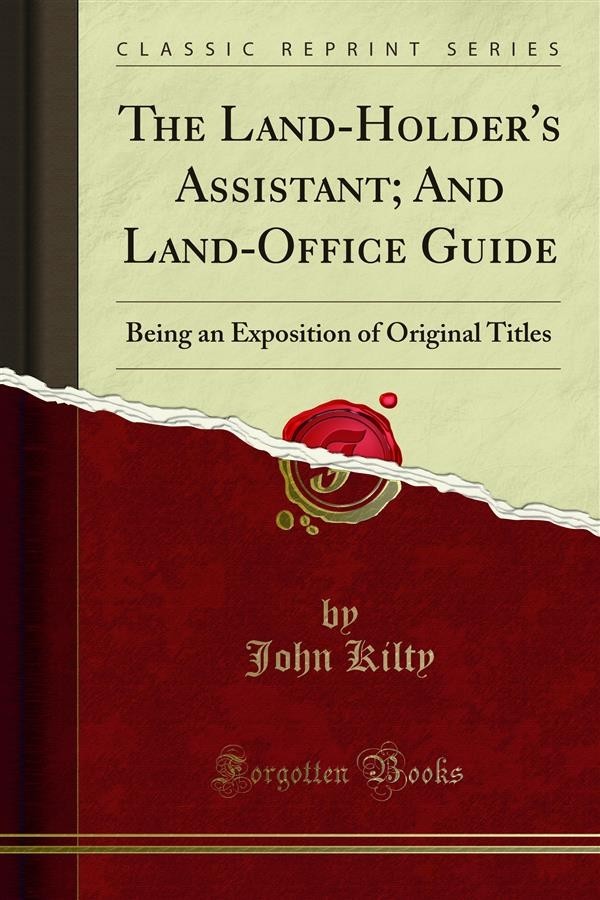 The Land-Holder's Assistant; And Land-Office Guide

This examination consists in several detached sketches of those parts of the early poUtical history of Maryland which have relation with the establishment and the progressive operations of the Land-Office ;in the exhibition of original documents relative to the same subject, and in a selection of exumpies of the various modes and forms of proceedingin land affairs; accompanied by such recitals, illustrations, and remarks, ushve appeared the bestcal. culated to convey a kind of knowledge very rare among the citizens of Marylau l.That I ha eexecuted this task in the best manner that my talents and opportunities would permit will, 1 presume, be readily believed ;for, in a production admitting so little of embellishment, I must ne1cessarily have depended for am degree of approbation and success upon its. real utility. I have known, as well from tle nature of this work as from -the countenance which the;; have given to it by anticipation, tliat it is to. undergo the scrutiny of professional gentlemen, capable of detecting errors in statement or in reasoning. I have also been persuaded that it Jwould attract the notice of an enlightened legislature, or, at least, of in. dividuals of that legislature, and other public functionaries, more or less i; acquainted with the subject of which I have been treating; and I have believed that it would not fail to engage the perusal of that respectable de- scription of citizens for whose use it is professedly designed. From the testimony and suifrage of such readers, and not trom any pretensions of 3 my own, I have been aware that the book must take its character, and i stand or fall in the public estimation. Although, therefore, the kindness of a large and respectable list of subscribers may have secured me from absolute loss, it is certain that my prospect of recompense for tlie time and labour devoted to this arduous enquiry must depend on the degree of sanction and approbation that my work may receive from those who are the best qualiiied to determine on its merit. In regard to applause, independent of its effect in the point of interest, my expectations are limited to the credit of having applied myself with diligence to the study of those matters which appertain to the office I was called to administer; a pursuit which certainly tend.? to the advantage and reputation of the govern ment in which that office holds its place: but this hope, though humble, has had its effect, in prompting me to the utmost exertion of my capaciv Ttyto shew that I had not merely skimmed the surface of the land-office system, but had dived to its origin and elements, in order to rescue from oblivion a species of knowledge which has hitherto, so far as it was not already buried in records out of use, and not likely to tempt inspection,- been dependent on the lives and memories of two or three individuals. I. =Lave, then, ma word, done my best to render this compilation worthy of Vthe public expectation, an lpatronage-; and, if I have failed, it is not for Kwant of effort, but of ability.