The Gathering, Packing, Transportation and Sale of Fresh Vegetables and Fruits 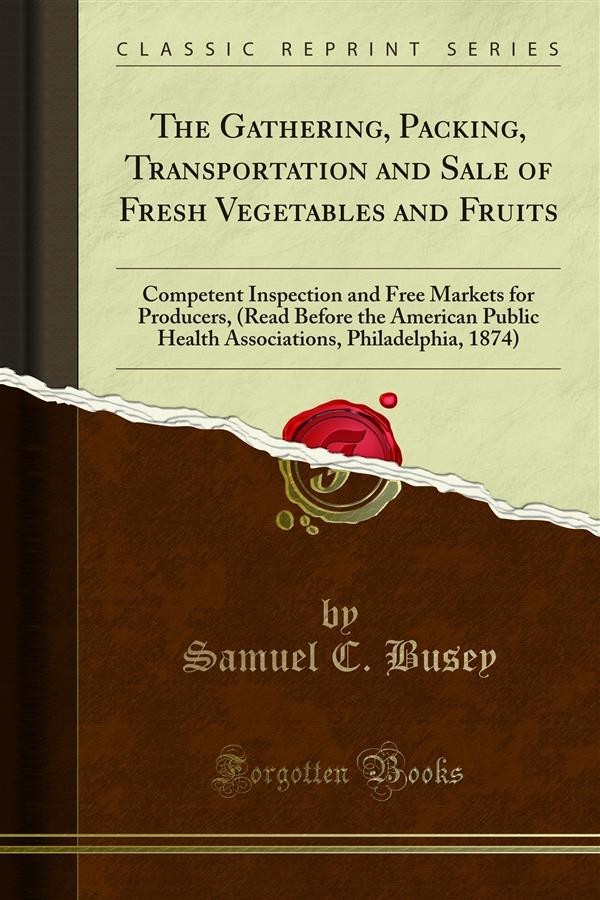 The Gathering, Packing, Transportation and Sale of Fresh Vegetables and Fruits

The cause is often something more tangible and gustatory than the foetid and subtle emanations which hygienists have striven so long to define and to circumscribe. I am disposed to shield Providence from the alleged agency in the causation of many of the ills which flesh is heir to, and to ascribe them to the indulgence of our own insatiate thirst and fondness for the "good things of this world." Even among very young children, the intestinal diseases are frequently directly traceable to the ingestion of unwholesome fruits and vegetables; noris the nursling exempt from the danger, even though the deleterious influence may only reach it through the defective milk supply of the mother feeding upon immature or deteriorated vegetables and fruits. In this connection, permit me, briefly, to call your attention to a few admitted facts. Not that I wish to use them to maintain any exclusive doctrine of causation, or to construct any new theory, but rather to extend the field of inquiry, and to direct your studies away from a too exclusive consideration of the very prevalently received opinions and theories in regard to the ever fermenting and wide spreading agency of bad smelling, impure and foul exhalations, as the chief and segregate cause of summer intestinal diseases.<br><br>Intestinal diseases, both among adults and children, are comparatively rare in the farming regions, and both classes of the rural population, adult and infantile, are more generally consumers of fruits and vegetables, and suffer less detriment therefrom, than like classes of the population of cities. Far the larger proportion of infantile intestinal diseases occurs among those beyond the age of six months, that is, subsequent to the period at which the natural aliment is usually considered by the laity adequate to the demands of growth and development; and far the larger percentage of mortality occurs among the children of the poor and squalid residents of cities - the class necessarily the most indiscreet consumers of cheap and deteriorated vegetables and fruits. Statistics establish the greater prevalence of these diseases between the ages of six and thirty months, and among the artificially fed; and greater proportionate mortality in the densely populated districts, and among the children of the poorer classes. Can it be that those under six months, those advanced beyond thirty months, and those nursed at the breast, are less exposed to and less impressible by atmospheric influences? Undoubtedly the intercurrent affections and developmental peculiarities of the period exercise very considerable influence in predisposing to intestinal disease; but, assuredly, improper alimentation must constitute the chief among the many factors concerned in the etiology. It is then manifest that intestinal diseases are most prevalent during the warmer months of the year - June, July, August and September, when vegetables and fruits are most abundant and deterioration most rapid - are proportionately far more frequent among communities of consumers, who can only obtain supplies by purchase, and are most fatal among the poor, who from necessity become the purchasers of the cheapest and most deteriorated.