History of the Alleghany Evangelical Lutheran Synod of Pennsylvania 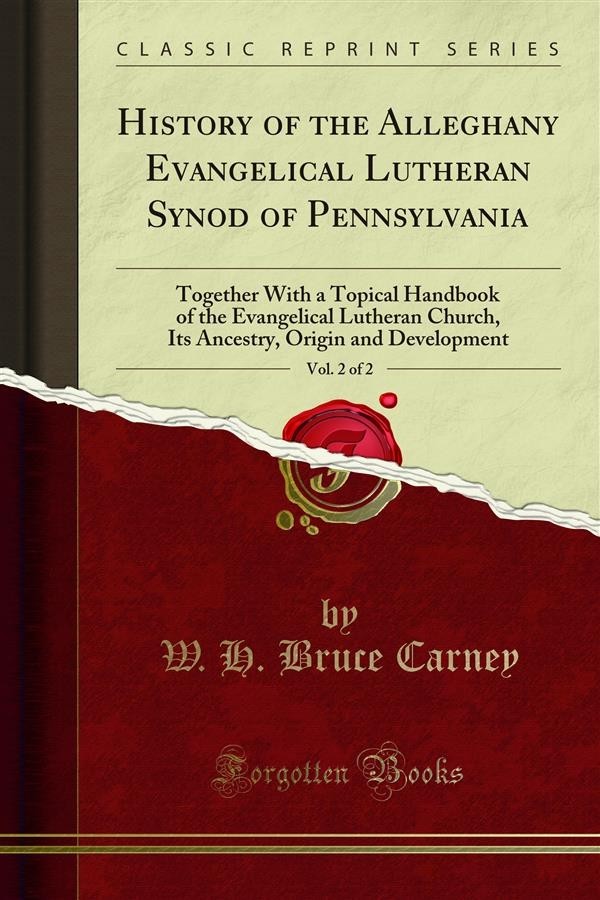 History of the Alleghany Evangelical Lutheran Synod of Pennsylvania

On October 7, 1876, Rev. E. Manges, pastor of the Luthersburg pastorate, organized, or, rather, re-organized the congregation at Troutville, with twenty-eight charter members. His parochial report is given in the history of the Luthersburg congregation.<br><br>From October 1, 1879 to January 31, 1882, Rev. J. T. Gladhill served. On May 1, 1882, Rev. W. Selner took charge of the Luthersburg pastorate, and on June 29, 1884, the cornerstone for a Lutheran church was laid by him, Rev. Best, of New Bethlehem, preaching the sermon. The new church was dedicated on December 21, 1884, free of debt, Rev. W. W. Criley of Altoona preaching the sermon and Rev. Best in the evening. The church is a frame structure, 32 by 50 feet, with a tower and recess of ten feet, well furnished, costing about $2,000. It was a joyful occasion. Three members, Amos Bonsall, Samuel Kuntz and Daniel Rishel, undertook to build the church themselves. Had it not been for these men, who paid two-thirds of the debt, the likelihood is that the congregation would be without a church to-day, or would have become defunct. Mr. Amos Bonsall gave the lot on which the church stands.<br><br>In the early history of the country, prior to the organization of the Lutheran church at Troutville. Jacob Kuntz immigrated from Germany to the vicinity of what is now the borough of Troutville. The country was but little better than a howling wilderness, settled but very sparsely. Father Kuntz gathered together the few children that were in the vicinity on Sundays and taught them best as he could. Later on a union Sunday school was organized on what is now known as the Kohler farm, about the year 1859. The Kuntz school merged into this school. Later on this school was transferred to the St. Paul's Lutheran place of worship soon after the organization of the congregation. During more recent years it became a Lutheran school, having adopted a Lutheran constitution and using the Augsburg literature.<br><br>St. Peter's Evangelical Lutheran Church<br><br>Luthersburg, Brady Township, Clearfield County, Pa.<br><br>This is another and the last of the original congregations which Rev. Willox organized in Clearfield County in 1840.