How to Break, Ride and Drive a Horse 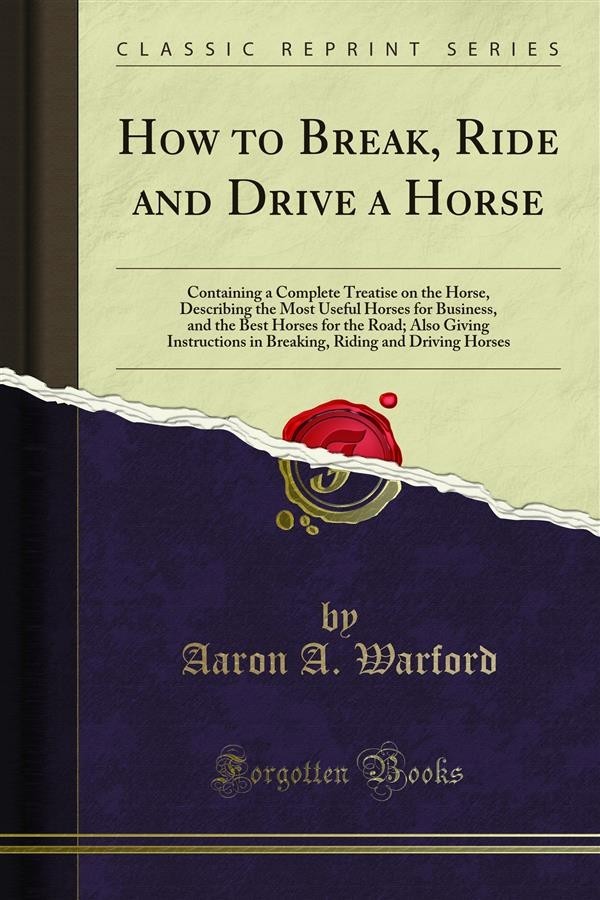 How to Break, Ride and Drive a Horse

Tue horse used for riding, commonly called "a hack," Is of a somewhat different description from either the hunter or the race-horse. Neither is the ordinary hack precisely like that called "the covert-hack." Many thoroughbred racehorses turn out good hacks, and some hunters also are active enough to answer the same purpose; but, generally speaking, this is not the case, and neither the one nor the other would come under the description of the "perfect back." The most obvious distinction in hacks is between park-hacks and road-hacks; the former requiring only a tine form with showy action, while the latter are selected for their serviceable qualities, and mast be capable of doing a distance in good time, with ease to themselves and comfort to their riders.<br><br>Tub Par-Back is generally what is called by tho horse-dealers a "flat-catcher," that is to say, he is a showy horse, with an appearance which will catch the eye, but really worthless, from some deficiency of constitution or infirmity of legs. There are every year some scores of useless brutes turned out of the racing stables with legs which will not stand a preparation, in consequence of their tendency to inflame and become sore. Now, these horses are often unfit for the hunting-field from defective hocks, or from some peculiarity of temper which prevents their taking to jump. They are often "well topped " — that is, well formed about the head, neck, and body, and, to the inexperienced eye, are very taking. They also often have high action, and sometimes particularly so, for the higher it is, the more likely to occasion inflammation of the legs. These animals are put by, cooled down, and blistered, and are then brought out as showy hacks, for the use of gentlemen who merely require a short constitutional airing every fine day of an hour or an hour and a half, and, as fine days do not average above four a week, most horses even of the most infirm legs can accomplish that amount of work, if ridden quietly over hard ground.