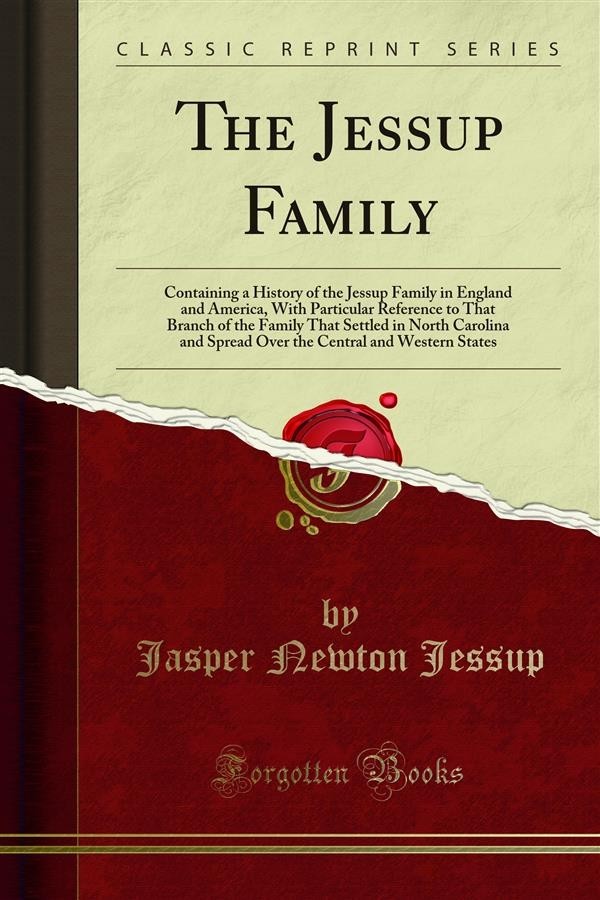 About three years ago I began to trace my family connection. At first it was only a passing whim. The work grew in interest and soon developed into almost a passion. There was no thought at the inception of anything more than to place in permanent form my own "family tree," running the line back as far as possible. The lines of inquiry spread in every direction; there seemed no stopping place. I have carried on a wide correspondence and pushed the investigation in every direction, reaching as far as England. I have been particularly interested in that branch of the Jessup family that settled in North Carolina in the early part of the eighteenth century, and later spread over the central and western States. I feel quite sure that I have traced out my own family connections with tolerable certainty. In regard to other branches of the family I can only say that I have done the best I could, putting together the family connections from many sources of information. Sometimes the information about the same family did not agree. Memory is a treacherous thing. Where there are no written records, there is almost certain to be confusion. I have put down the facts where it was possible to do so; and where there was discrepancy or contradiction, I worked out what seemed, under all the conditions, to be the most probable. If I have been able to make a beginning of family history which each family will follow out for itself I shall feel my little contribution is worth while. Each family will have to take the skeleton here submitted and fill it out to completion.<br><br>In 1887, Rev. Henry G. Jesup, of Hanover, N. H. at the suggestion and under the patronage of Morris K. Jesup, of New York City, published a book entitled, "Edward Jessup and His Descendants." There was a very limited number printed and the book can not now be had. I borrowed a copy and have the permission of Morris K. Jesup (the author being dead) to reprint that portion of it relating to the general history of the family in England and America. That book deals with that branch of the family that settled in Connecticut. I am indebted to this book for much valuable information on the general history of the family. I am indebted to Joseph Jessop, of Coronado Beach, California, for valuable information and to many others for scraps of history. No doubt errors will appear to those in a position to know certainly. I will be pleased to receive such corrections and preserve them for future use.<br><br>The numbering in connection with names is purely arbitrary, for purposes of identification.