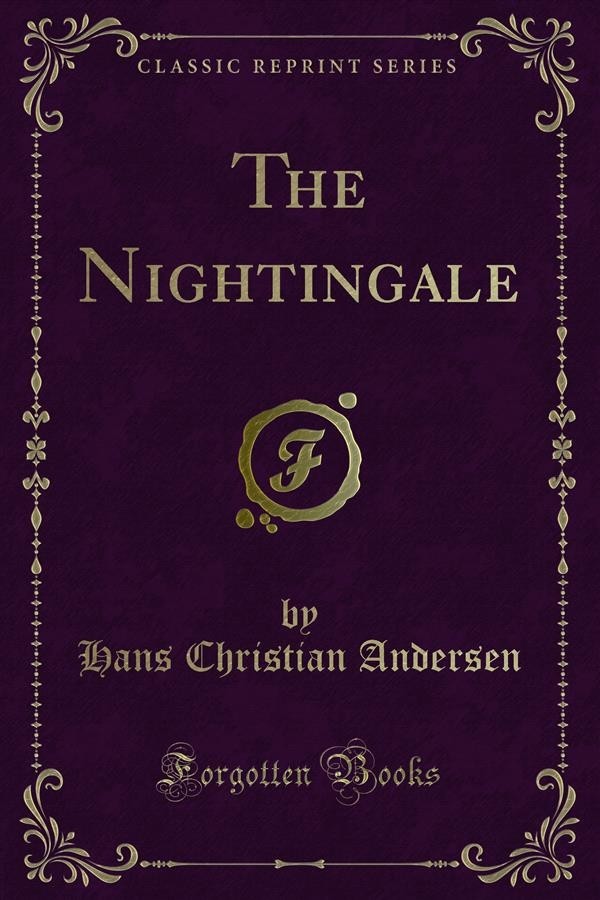 Being A story for children and A parable for men and women. N china, you must know, the Emperor is a Chinaman, and all whom he has about him are I Chinamen too. It happened a good many years ago, but that's just why it's worth while to hear the story before it's forgotten! The Emperor's Palace was the most splendid in the World; it was made entire ly of porcelain, very costly, but so delicate and brittle that one had to take care how one touched it. In the Garden were to be seen the most wonderful ﬂowers, and to the costliest of them silver bells were tied, which sounded, so that nobody should pass by without noticing the ﬂowers. Yes, every thing in the Emperor's Garden was admirably arranged. And it extended so far, that the Gardener himself did not know where the end was. If a man went on and on, he came into a glorious forest with high trees and deep lakes. The wood extended straight down to the sea, which was blue and deep; great vessels could sail beneath the branches of the trees, and in the trees lived a Nightingale, which sang so splendidly that even the poor Fisherman, who had many other things to do, stopped still and listened, when he had gone out at night to throw out his nets, and heard the N ightin gale. How beautiful that is! He said; but he was obliged to attend to his property and thus forgot the bird. But when in the next night, the bird sang again and the Fisherman heard it, he exclaimed again, H ow beautiful that is!tin at? From all the countries of the World, Travellers came to the City of the Emperor and admired it, and the Pal ace and the Garden, but when they heard the song of the Nightingale, they said: That is the best of all! And the Travellers told of it when they came home; and the learned men wrote many books about the Town, the Palace, and the Garden. But they did not forget the Nightingale; that was placed highest of all; and those who were Poets wrote most magnificent poems about the Nightingale in the wood, by the deep lake. The books went through all the World; and a few of them once came to the Emperor. He sat in his golden chair, and read, and read; every moment he nodded his head, for it pleased him to peruse the masterly descriptions of the City, the Palace, and the Garden. But the N i ghtin gale is the best of all it stood written there. What's that? Exclaimed the Emperor. I do not know the Nightingale at all! Is there such a bird in my Garden? I've never heard of that: to learn such a thing for the first time from books! And hereupon he called his Cavalier. This Cavalier was so grand that if any one lower in rank than himself dared to speak to him, or to ask him any question, he answered nothing but P! And that meant nothing.