A Record of the Descendants of Capt. George Denison, of Stonington, Conn 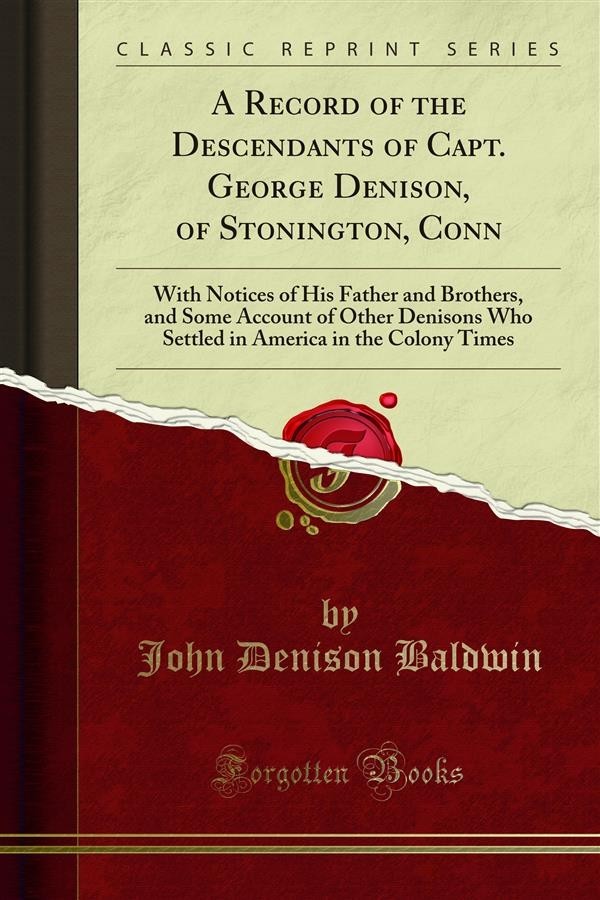 A Record of the Descendants of Capt. George Denison, of Stonington, Conn

This tribute to the memory of our grandmothers, Anna. Denison Clift and Sarah Denison Baldwin, daughters of .John Denison and Abigail Avery Denison of Stonington, began many years .ago, grew into the proposition to publish the volume three years since. Circulars were sent out in 1878, and subscriptions enough were sent in to guard against loss in meeting the expenses of publication, and the printing was commenced in October, 1880. The work of compiling and publishing a genealogy of the descendants of any of the early settlers of New England is necessarily long and tedious. Some of the descendants take no interest in the matter; some who are interested forget to write; others furnish the required information only after repeated requests; and others still, promise and fail to fulfil. The delay in issuing the work has been unavoidable, and has always been in the interest of subscribers. With longer time and more zealous cooperation on the part of some of the descendants, we could have added largely to the list of family records. Our rule, to stop the records with the children of Denison women married with other families, has been departed from in some special cases, bringing the descendants down to the present generation. There are probably enough of descendants hearing the name, and of the Denison women not yet heard from, to make another volume as large as this. The work of collecting and publishing them must be left to other hands.<br><br>This genealogical record is not complete; it is seldom or never possible to make such a record complete. It is sent forth with the hope that it will be acceptable to the living members of the family, strengthen the ties of kindred, and stimulate the present and future generations to emulate the piety and the patriotism of the early settlers bearing the name of Denison.