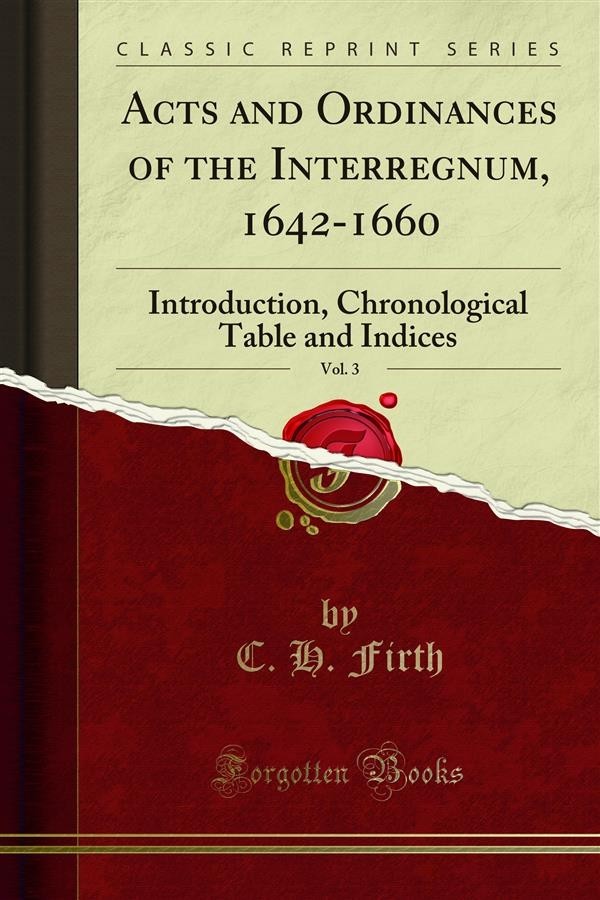 A student of English legislation who limited his work to an examination of the volumes containing the Statutes of the Realm would entirely overlook one of the most interesting periods in the history of his subject. The Statute Book is a blank from the close of the 16th year of Charles I. (1640-1) to the year of the Restoration, the so-called 12th year of Charles II. (1660). Yet the intervening period was a time of great legislative activity; the attention of Parliament was not solely directed to war, or finance, or constitutional experiments; there was much general legislation of every kind; many legal and social reforms were attempted which, if often premature and abortive, were yet in some instances permanent and far-reaching.<br><br>Having regard to the historical importance and the permanent results of this legislation, and to the fact that there does not exist any collection of the Acts and Ordinances passed during these nineteen years, the Statute Law Committee determined to collect and republish them. The work was commenced in 1899, by Mr. F. F. Liddell (now Assistant Parliamentary Counsel), continued by Mr. W. M. Graham Harrison, and completed by the two editors whose names are on the title page.<br><br>The intention of these volumes is to present in a complete form, with the omission of enactments which seemed of little interest, the entire parliamentary legislation of the years between the outbreak of the Civil War and the Restoration. By parliamentary legislation is meant legislation enacted by the two Houses of Parliament, so long as there were two Houses, or by the House of Commons alone after it had assumed the sole legislative power; in fact, everything that came to be regarded at the time as standing in the same position as the old statutes. To these are added certain ordinances issued by the Protector and his Council in the years 1653-4, which operated for a time as Acts of Parliament.