Chinese-English Dictionary of the Vernacular or Spoken Language of Amoy 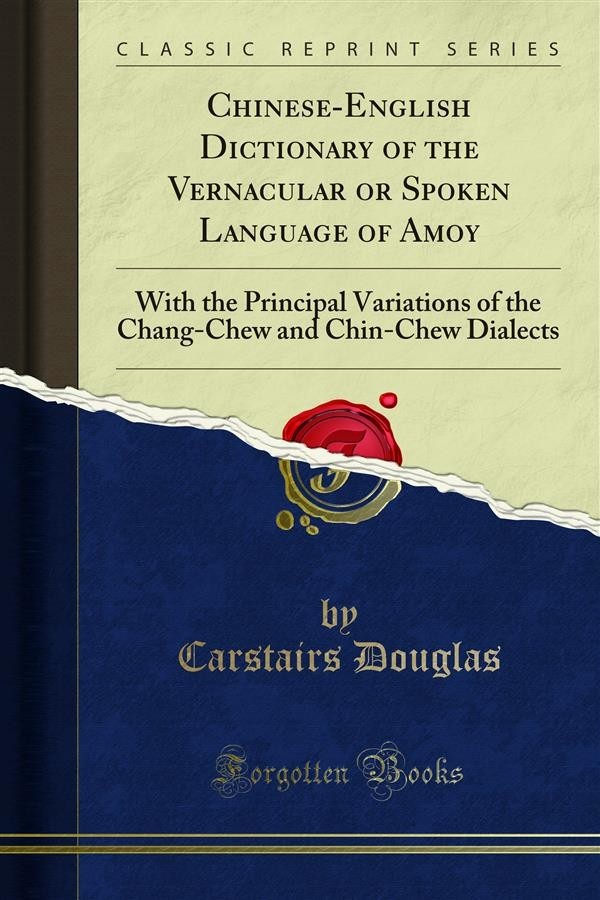 Chinese-English Dictionary of the Vernacular or Spoken Language of Amoy

The vernacular or spoken language of Amoy, which this Dictionary attempts to make more accessible than formerly, has been also termed by some "The Amoy Dialect" or "The Amoy Colloquial;" and it partially coincides with the so-called "Hok-kien Dialect," illustrated by the Rev. Dr. Medhurst in his quarto Dictionary under that title. But such words as "Dialect" or "Colloquial" give an erroneous conception of its nature. It is not a mere colloquial dialect or patois; it is spoken by the highest ranks just as by the common people, by the most learned just as by the ignorant; learned men indeed add a few polite or pedantic phrases, but these are mere excrescences (and even they are pronounced according to the Amoy sounds), while the main body and staple of the spoken language of the most refined and learned classes is the same as that of coolies, labourers, and boatmen.<br><br>Nor does the term "dialect" convey anything like a correct idea of its distinctive character; it is no mere dialectic variety of some other language; it is a distinct language, one of the many and widely differing languages which divide among them the soil of China.<br><br>The so-called "written language" of China is indeed uniform throughout the whole country; but it is rather a notation than a language; for this universal written language is pronounced differently when read aloud in the different parts of China, so that while as written it is one, as soon as it is pronounced it splits into several languages. And still further, this written language, as it is read aloud from books, is not spoken in any place whatever under any form of pronunciation. The most learned men never employ it as a means of ordinary oral communication even among themselves. It is in fact a dead language, related to the various spoken languages of China somewhat as Latin is to the languages of South-western Europe.<br><br>A very considerable number of the spoken languages of China have been already more or less studied by European and American residents in the country, such as the Mandarin, the Hakka, the vernaculars of Canton and Amoy, and several others. These are not dialects of one language; they are cognate languages, bearing to each other a relation similar to that which subsists between the Arabic, the Hebrew, the Syriac, the Ethiopic, and the other members of the Semitic family; or again between English, German, Dutch, Danish, Swedish, &c.<br><br>There is another serious objection to the use of the term "dialect" as applied to these languages, namely, that within each of them there exist real dialects. For instance, the Mandarin, the greatest of all, contains within itself at least three very marked "dialects," the Northern, spoken at Pekin; the Southern, spoken at Nanking and Soo-chow; and the Western, spoken in the provinces of Sze-chuen, Hoo-peh, &c.<br><br>In like manner the language which for want of a better name we may call the Amoy Vernacular or spoken language, contains within itself several real dialects, especially those of Chang-chew, Chin-chew, Tung-an, and of Amoy itself. In this Dictionary the form of the language spoken at Amoy itself is taken as the standard, and the principal variations of the Chang-chew and Chin-chew dialects are marked, as also a considerable number of the variations occurring in Tung-an, Chang-poo, and some other regions.<br><br>The language of Amoy, including these subordinate dialects, is believed to be spoken by about eight or ten millions. This is the first dictionary of the spoken language. There are numerous dictionaries of the universal written language of China.