A General and Heraldic Dictionary of the Peerage and Baronetage of the United Kingdom, for 1826 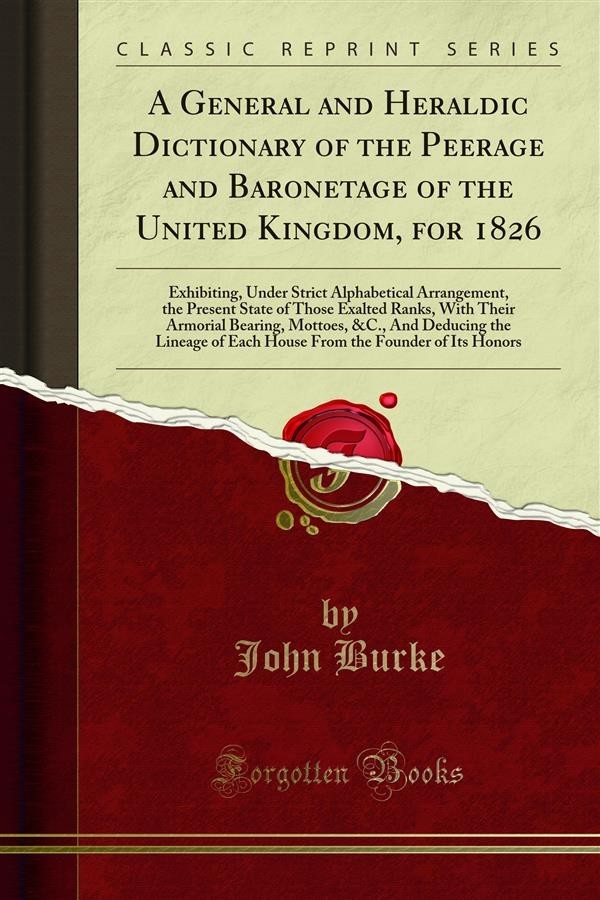 A General and Heraldic Dictionary of the Peerage and Baronetage of the United Kingdom, for 1826

His most gracious majesty george-augustus-frede. Rick, the fourth, kingoftheunited Kingdom of Great Britain and Ireland, and King of Hanover; Defender of the Faith; Duke of Lancaster, Cornwall, and Edinburgh; Marquess of the Isle of Ely; Earl of Garrick and Eltham; Viscount Launceston; Baron of Renfrew; Lord of the Isles, and Great Steward of Scot land; Sovereign of the illustrious Orders of the Garter, of the Bath, of the Thistle, of St. Patrick, of St. Michael and St. George, and of the Royal Hanoverian Guelphic; Knight of the Russian Orders of the Black Eagle, of St. Alexander Newski, and of St. Anne; of the Polish Order of the White Eagle; of St. Esprit, in France; of the Golden Fleece, in Spain; and of \villiam, in the Netherlands b. On the' 12th of August, 1762; succeeded to the throne upon the demise of his fither, George the Third, on the 29th of January, 1820; crowned in the Abbey Church of St. Peter, Westminster, on the 19th of July, 1821. His Majesty, when Prince of Wales, a. (on the 8th of April. His first-cousin, Caroline Elizabeth, second daughter of his Serene Highness charles-william, Duke of Brunswick, sister of the late gallant Duke, and aunt of the present Duke, (6. 17th May, by whom he had an only daughter, charlotte-augusta, 6. 7th January, 1796, 2nd May, 1816, his Royal Highness impold-george-fredetick, Duke of Saxe, Margrave of Meissen, Landgrave of Thuringuen, and Prince of Coburg, of Saalfield, Knight of the Garter, and Knight Grand Cross of the Bath. Her Royal to the inexpressible regret of an empire, wherein her popu larity was unbounded, expired in a few houu after being delivered of a still-born child, on the 6th of November, 1817.