Genealogy of the Kemper Family in the United States 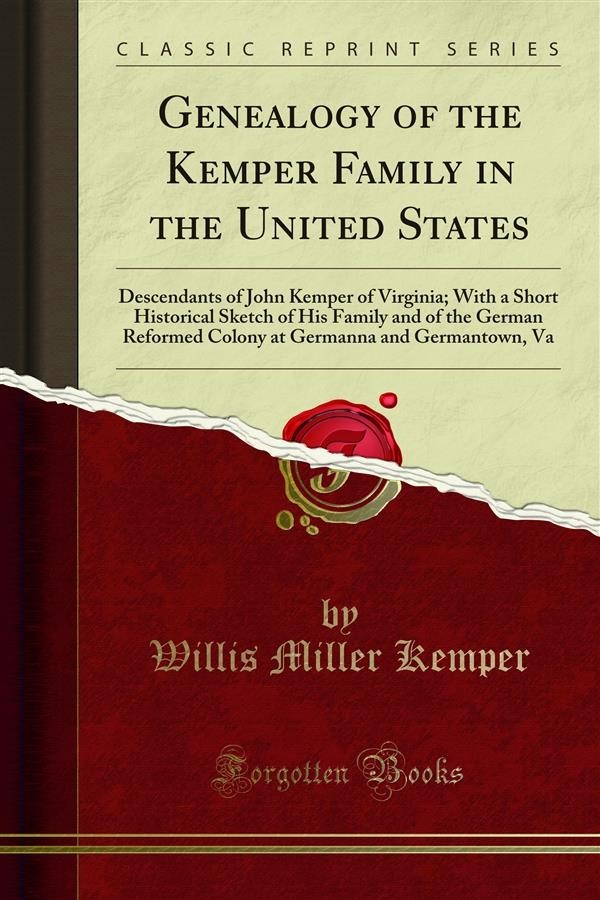 Genealogy of the Kemper Family in the United States

The Genealogical Record is just what it claims to be; not a history, but a genealogy. No attempt has been made to write historical sketches, however interesting they might have been, of the various members of the family, because it would have so largely added to the bulk and cost of the book. It is a genealogy pure and simple. If another edition should seem to be warranted, possibly much can be done in that direction. The arrangement of the work is apparent. The names are given by generations; all the members of one generation being given before the next begins. Every person is numbered and the numbering runs straight through from the beginning to the end. It will be seen that there are two columns of figures on every page, the outside column refers back to the previous generation, the inside one forward to the succeedinggeneration. To follow the record of any person, take his number as given in the inside column and turn to the succeeding generation, where it appears in the outside column. Thus on page 56, John Peter Kemper, the eldest son of the emigrant, is N o. 14. Turn to page 59 where 14 appears in the outside column, and John Peter Kemper's record is given. Should you wish to follow the line of James Kemper, the sixth child of John Peter, whose number on this same page is 53, turn to the next generation on page 66 where 53 appears in the outside column, and you will find James Kemper's record in full; and so on. Aid is given by following each name by the character, I if it appears in the next generation.