Military Journal, During the American Revolutionary War, From 1775 to 1783 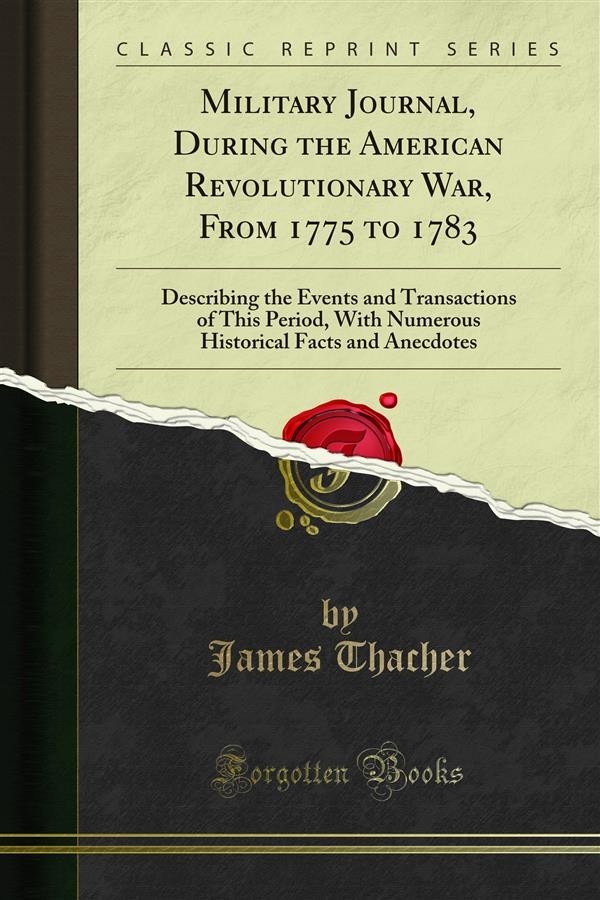 Military Journal, During the American Revolutionary War, From 1775 to 1783

IT is through your earnest solicitations, my dear friends, that I commit to public inspection the crude fragments recorded in my Military Journal, kept during the American Revolutionary War. The subordinate station which I sustained did not permit access to the great source from which all important events derived their origin; nor was I made acquainted with the views and motives of action. The transactions and occurrences which I shall relate, though of minor import, and penned for temporary amusement, are nevertheless of a nature too deeply interesting to be consigned to obliv ion. N o circumstance pertaining to our country's emancipation, but should be embalmed in the memory of our children, and transmitted to the latest posterity, as among the most interesting transactions recorded in the annals of man. When we contemplate the vastly-extended consequences of our revolution, it will be conceded that every incident respecting its rise and progress, and the renowned patriots and heroes by whom it was achieved. Is well worthy of perpetual remembrance. With these are associated the primary principles of the rights of man, which so successfully prevailed at the period of our country's infancy. Those principles, which are the great spring of action in the bosom of the honest patriot, Spurn the power and paralyze the hearts of tyrants. The contents of these sheets refer more to details of military mancsuvres and the internal police of camps, than to projects and events which decide the fate of nations: they may, however, afi'ord amusement to the inquisitive mind, and, to the rising generation, precepts not altogether destitute of importance and useful instruction. They will disclose some interesting particulars, not generally known, and may serve to augment the stock of information developing the fatal policy of the British government, as displayed on the theatre of her American colonies. This production may, moreover, subserve the purpose of an epitome of the history of the revolutionary contest, and abridge in some measure the labor of the youthful mind in the study of the more elaborate and technical histories of that ever-memorable epoch. With this view, I have prefixed a short sketch of interesting transactions prior to the actual commencement of hostilities. History, says a late elegant writer, pre sents no struggle for liberty which has in it more of the moral sublime than that of the American revolution. It has been of late years too much forgotten in the sharp contentions of party; and he who endeavors to with draw the public mind from these debasing conﬂicts, and to fix it on the grandeur of that epoch, which, magnificent in itself, begins now to wear'