Genealogies of the Clark, Parks, Brockman and Dean, Davis and Goss Families 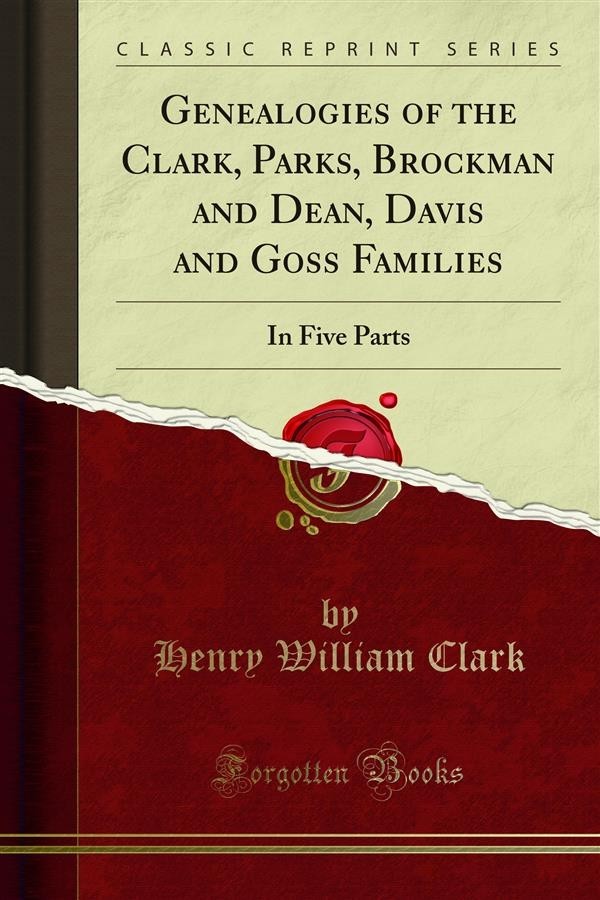 Genealogies of the Clark, Parks, Brockman and Dean, Davis and Goss Families

The separate parts are: No. I. The Clark Family; No. II. The Parks Family No. III. The Brockman and Dean Families; No. IV. The Davis Family, and No. V. The Goss Family. He engaged in the work with no intention of publishing it, but instead he intended simply to leave a manuscript copy to his chil dren. After many inquiries as to his purpose, and with expres sions of desire from many persons to possess a copy, he deter mined to publish it in book form. He so announced, enlarged the scope, invoked the aid of his friends, and has devoted much time and patient labor collecting information for use in its preparation. The work has assumed proportions greatly beyond his expecta tion. The chronology of persons and families has had special atten tion. This, however, is not the highest function of genealogy, valuable though it be in tracing and proving a line of descent and relationship, but it is the preserving and presenting to our contemplation the lives and real character of our ancestors and kindred. This has been kept prominent and becomes therefore an interesting feature of the work. Each of the several parts of the work comprises a distinct line, and the persons are named in the order of birth, so far as the facts were obtainable. In some of the parts eight generations are accounted for.