A Dictionary of English Phrases 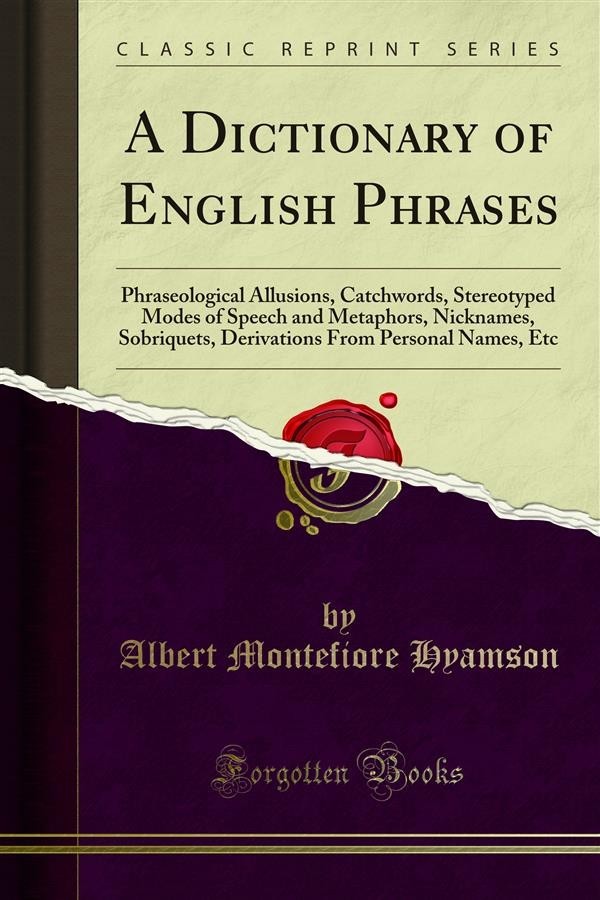 A Dictionary of English Phrases

A third class of words that have been included in this work are those which are usually to be found in slang dictionaries. They consist of slang words and colloquialisms that have degenerated, and references are generally given to the former position of the words in. Question in literary English. Side by side with these are to be found other words, which have ascended in the scale, and although of low, vulgar origin, are now received in the best social circles. In treating of words belonging to this third class there may sometimes have been some anticipation, words having been included which have not yet obtained admission to the highest circles, but which one is justified in expecting will shortly secure that privilege. An endeavour has, in fact, been made to exclude ordinary slang words and phrases, but so rapid has been the development of the English language, especially during the recent war, in the course of which it was enriched but not always embellished by new phrases and words, that it has at times proved very difficult to decide. However, those words and phrases of which there is a promise of permanency have been included, but in deciding the author has had to rely on instinct rather than on judgment. Many foreign words and phrases that have become incorporated in the English language without change also find their places in the following pages. A large proportion of the following items consists not of words but of phrases. Many of them belong to one or another of the classes that have already been mentioned. But phrases give one a wider opportunity than do words. The number of phrases in current use in the English language that are in fact metaphors, although the user seldom stops to notice the fact, is legion. Nearly all words and phrases are, of course, in their ultimate origin metaphors, but in most cases the metaphor has been concealed by the deposits of ages. However, there are still a very large number of phrases in which the metaphor is patent to anyone who stops for a moment to look for it. One of the purposes of the present volume is to collect for the curious these metaphorical phrases and to throw a little light on their origins and on their growth. Here one comes closely into contact with proverbs. But proverbs have not been included qua proverbs. A dictionary of proverbs deserves a volume to itself. Only when a proverb has given rise to a word or phrase which is in fact a crystal of the proverb has attention been given to it.