The Complete Works of Plutarch 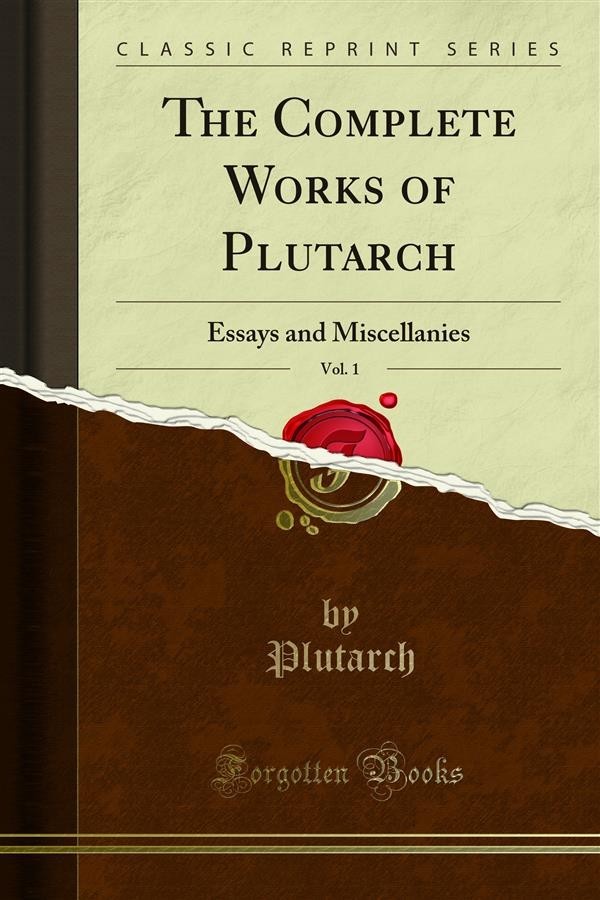 The Complete Works of Plutarch

It has been Observed already that the age in which Plutarch lived was in some sort an age of moral reaction, one in which vigorous attempts were made, and from various quarters — these too not wholly ineffectual to arrest the advances Of a corruption that threatened to sweep away all the barriers which hitherto had kept it within bounds. We know that these attempts did only very partially succeed; we can understand how in the nature and necessity Of things their ultimate failure was inevitable. The moral bankruptcy Of the heathen world may have been by them deferred, but it was not averted. Not philosophy, not a resuscitation of faith in the gods of Hellas, not the bringing in and combining with this of the Oriental worships and wisdom, not the reviving and quickening Of anything good which the Old world possessed already, nor yet all of these together, but Christianity, newly born from above, was to regenerate and save society. Yet for all this, it would be a serious mistake to underrate and to despise these well — meant efforts; though a fault less serious, it may be, than to exalt them overmuch, or to count that they rendered, or could have rendered, superﬂuous the bringing in of a purer hope and a better faith. With all its weaknesses and shortcomings, the school or lecture — room was the best and most effectual which, as a moral teaching power, the heathen world at this time could boast — the nearest approach to the Chris tian pulpit which it possessed. It is impossible to resist the conclusion that a very large amount of genuine and healthy work was wrought by those who laid themselves out, by the conscientious use of such helps as the best wisdom of the world at their command afforded, to serve their generation; that many were by them assisted to live their lives after a far higher and worthier fashion than else they would have attained. Saying this, I would not conceal from myself or from you all which was want ing here; as, on the part of those who spoke, the mouth and wisdom directly given from above; with a deficiency too exactly corresponding to this on their part who heard; while even at the very best the teacher addressed, and could hope to inﬂuence, only a select and cultured minor ity, endowed with leisure, and not without some tincture of learning. There was, it is true, an attempt at a more popular propaganda on the part of some among the later Cynics, who in their good and in their evil remind us so constantly of the Mendicant Orders of the middle ages; but these efforts of theirs to reach the poor and the igno rant, and to preach to them such a gospel as they had, were too few and too isolated to count for very much.